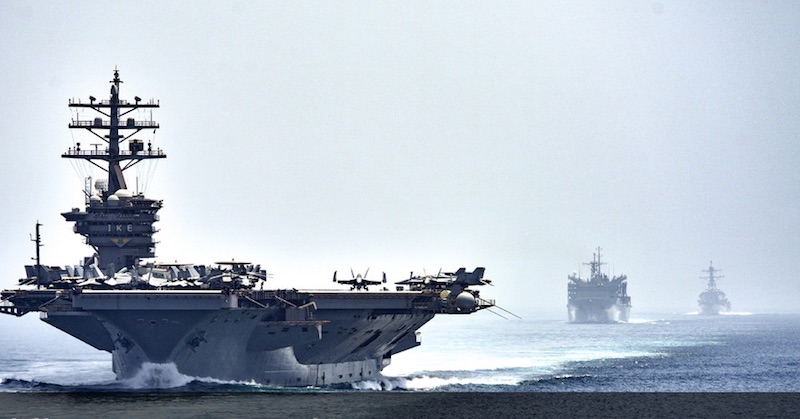 Barack Obama has officially retreated from the Middle East.

With the steaming away of the Dwight D. Eisenhower carrier strike group, it is the first time in memory the United States has not has a major carrier presence operating in the Arabian Gulf – and it could not come at a worse time.

The Eisenhower left on the 26th and its official homecoming was the 30th. There’s not another ship schedule to sail unto the waters until after the inauguration on Jan. 20. That ship – the carrier George H. W. Bush has yet to leave Norfolk. That leaves a two month gap, Defense News reports.

Terror alerts are high in many of the area regions, including Europe, the Middle East and North Africa.

In the past, other Central Command carrier battle groups have taken the place in the last when a strike group is needed elsewhere or needs maintenance issues. The Pentagon routinely plans for such an event – but not this time. D-News reports:

The newest gap is not a surprise, and actually has been months in the making — arguably well over a year. The Bush entered Norfolk Naval Shipyard in Virginia in mid-June 2015 for what started out as a planned six-month repair period, extended just before it began to eight months. Facing a scheduled early-December 2016 departure date to relieve the Eisenhower group, the initial delay seemed manageable, giving the group nearly nine months to work through the predeployment training cycle.

But the overhaul dragged on well past the March completion date. Navy officials have been sparing at best and sometimes contradictory in explaining why the overhaul took so long — the explanations complicated by multiple oversight commands, including Naval Nuclear Reactors, Naval Sea Systems Command, Naval Air Forces and US Fleet Forces Command. The reasons given ranged from poor planning to emergent work — often unspecified — to the lack of enough trained personnel at Norfolk Naval Shipyard due to previous layoffs and funding interruptions.

In the event, the Bush finally left the shipyard July 23 after more than 13 months in overhaul, facing a drastically compressed training period if the early December date could be met. But the command responsible for training the Bush and her strike group, US Fleet Forces Command, apparently did not have a plan in hand to deal with the short training cycle, although something called the Optimized Fleet Response Plan is supposed to deal with such eventualities. According to several sources, Fleet Forces didn’t hold a major meeting of all parties to determine a way ahead until late August.