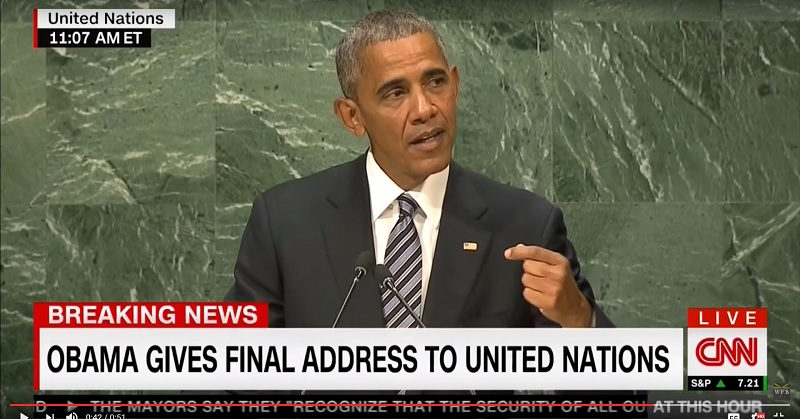 Only by submitting to a one-world-style government can the countries of the world effectively fight terror, Barack Obama warned during a speech to the United Nations General Assembly.

In what will likely be his last speech before the body, Obama told the audience that he believes global security can only be achieved with the help of international institutions like the UN.

Not only that, but that only by acquiescing our rights – our “freedom of action,” as he puts it – will we truly “enhance our security.”

Obama said “powerful nations” like the United States will have to accept constraints and give up some of their freedoms. The president acknowledged that he has been criticized by his own citizens for this belief but he remains convinced he is right. Obama also stated that while countries will have to accept some limits on their freedom, they should not give up autonomous rights like the freedom to defend themselves.

“We have to put our money where our mouths are. And we can only realize the promise of this institution’s founding to replace the ravages of war with cooperation if powerful nations like my own accept constraints. Sometimes I’m criticized in my own country for professing a belief in international norms and multilateral institutions, but I’m convinced in the long run giving up some freedom of action, not giving up our ability to protect ourselves or pursue our core interests but binding ourselves to international rules, over the long-term, enhances our security.”

Make no mistake – calling for the transfer of America’s sovereign rights – in trade, diplomacy, military allocation – anything to a one-world body is beyond dangerous.

The transcript of his full remarks can be found here.