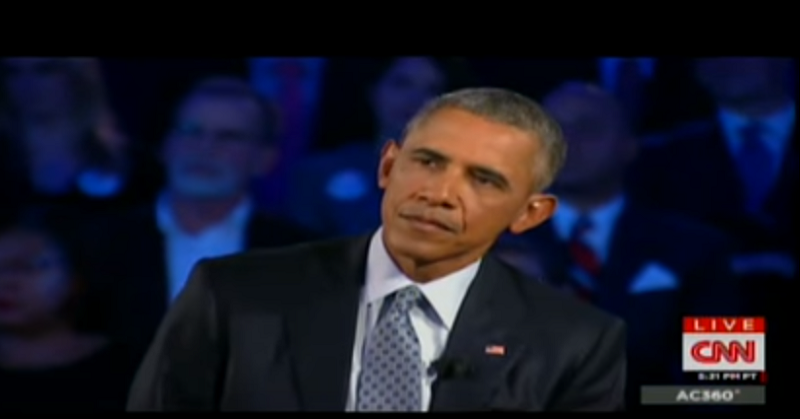 Is it a shock to anyone that the more President Obama targets an organization, the more popular it becomes?

At this rate, the NRA will become one of the most popular institutions in America before his presidency is done.

AGallup poll out in Octoberfound that 58 percent of Americans have a favorable view of the NRA. That’s a 16 percent swing from 20 years ago when 42 percent had a favorable view.  By comparison, the U.S. military, the most favored institution in America, has a 73 percent confidence rate,according to a June Gallup poll

, while the U.S. police had a 54 percent confidence rate by Americans.

The lies put forth by gun control zealots are clearly aimed at people who know nothing about guns. During the White House-orchestrated spectacle Thursday, Obama claimed people can “just go on the Internet and buy whatever weapon they want.” He failed to explain that purchases over the Internet are mediated through local dealers who are sent the guns and perform the background check before delivery.

Just this week, Rand Paul schooled Whoopi Goldberg on access to automatic weapons (modern-day automatic weapons are rarely in the collections of average Joe citizens, unlike semi-automatic weapons) and gobs of people on social media have been corrected in their erroneous claim that there are no background checks at gun shows (only private sellers don’t have to be federally licensed, and there’s a limit to the number of guns they can sell. Seventeen states have their own licensing requirements, reducing further the number of unlicensed sellers. The NRA’s Chris Cox said this week that 0.7 percent of gun crimes are committed with a gun purchased at a gun show).

Let it be noted (h/t Breitbart) that FBI figures show that 2015 set a record for the number of background checks performed in a single year — 23,141,970. Ergo, more gun purchases, more background checks.

The pièce de résistance at the so-called town hall was when Obama made this doozy of a statement to none other than Chris Kyle’s widow, Tara Kyle:

“I think the most important point I want to make is that you will be able to purchase a firearm, some criminals will get their hands on firearms even if there is a background check … But in the same way that we don’t eliminate all traffic accidents but over the course of 20 years traffic accidents get lower … but over time that violence was reduced so families are spared. That’s the same thing we can do with gun ownership.”

So traffic accidents are “violence.” Yet he hasn’t gone after cars, has he (except maybe their fuel tanks)? Not to mention, traffic accidents exceed the number of gun crimes each year. There were 32,999 traffic fatalities in 2013, presumably few committed as suicide. The Centers for Disease Control and Prevention says there were 11,208 gun deaths by homicide and 505 fatal accidental discharges in 2012.

Note: There were 310 million civilian firearms in America in 2009, according to ATF. The Washington Post extrapolated that by 2013, that number reached 357 million. There were 256 million highway vehicles in the U.S. in 2013. You do the percentages of deaths by firearm vs. vehicle.

Seems to me that automobiles are way more dangerous. Where’s the car-control lobby?

And by the way, Obama statement to Kyle came after he acknowledged that violent crime in America is at a 44-year low, though he refused to create a correlation between increased gun ownership and fewer criminal acts.

It’s no wonder that in a Pew poll out earlier this week, 16 percent of Americans, the largest plurality identified government as America’s biggest problem.