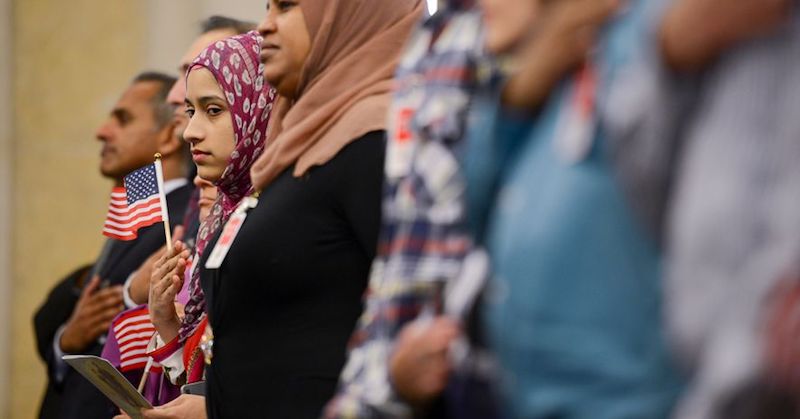 When people express concern about the flood of Middle Eastern refugees coming into the United States, or the radicalization of second- or third-generation Arab Americans, they’re immediately branded a “racist.”

Which, by definition, was false, since the term “Middle Eastern” is not a race.

In fact, people from the Middle East and North Africa are officially listed as “white.”

So what can leftists do when they want to keep calling ordinary Americans “racist” if the source of their concern isn’t even a racial category?

Just make it one!

The Obama Administration is introducing a proposal to add a brand new racial category for people from that part of the world. That way, if anyone tries to ask about terrorism within Middle Eastern immigrants, they can be called Islamophobes and racists. A two-fer of slander!

Back in 1882, Syrian Amerians argued in court – and won – that the racial category of people from the Middle East should be considered “white” (that way, they wouldn’t fall under the Chinese Exclusion Act and could still immigrate to the US and become citizens.

So under current law, people from the Middle East and Northern Africa – from Morocco to Pakistan to Iran – are given the racial designation of “white.”

But because modern American politics is all about division and segregation, leftists want to create the new racial designation so people from that part of the world can feel separate and distinct from “white people” – which is probably the opposite of what we’d want.

“What it does is it helps these communities feel less invisible,” Helen Samhan of the Arab American Institute, told USA Today “It’s a good step, a positive step.”

They made their proposal in the Federal Register on Friday and a res seeking public comment on the idea.

“Arab” is an ethnicity and “Muslim” is a religion, but the new designation would include everyone from that area, including Israeli Jews and Coptic Christians. If this sails through, the new racial category would appear on the 2020 Census.

And just look at all the cool things you can track if you create a whole new racial category!

A whole new army of bureaucrats looking for ways to find racism in America!

Comments on the proposal are due in 30 days, making it possible for the Obama administration to enact the change in the last three months of a presidency that has spent considerable effort to be more inclusive of Arab-Americans and other Middle Easterners.

“I think with him being the first African-American president and being an obvious example of making the American fabric more diverse, that this could be great sign of inclusion about what it means to be an American,” said Germine Awad, an Egyptian-American and professor of educational psychology at the University of Texas at Austin.