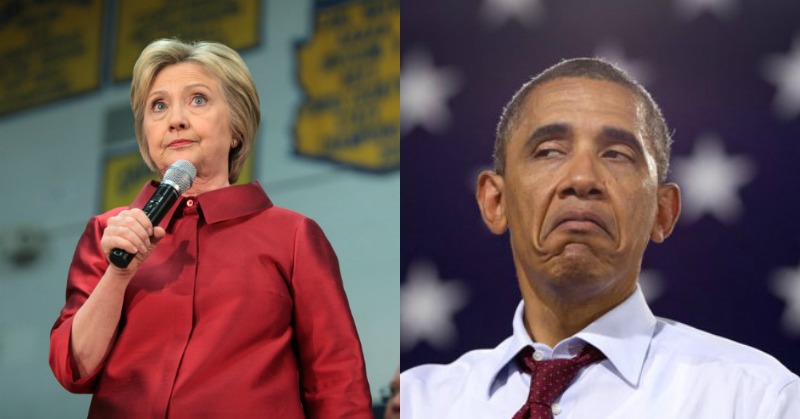 On the campaign trail, now President-elect Donald Trump promised to appoint a special prosecutor to investigate Hillary Clinton’s crimes. As many suspected, the White House confirmed that they are open to a pardon for Clinton.

During Wednesday’s press briefing, White House Press Secretary Josh Earnest discussed the possibility of pardoning Clinton — despite the fact that she has not been charged with anything at this point.

“The president has offered clemency to a substantial number of Americans who were previously serving time in federal prisons,” Earnest told reporters.

In addition to Clinton’s use of private servers to send and receive classified information, there have also been reports about the investigation of pay-to-play schemes at the Clinton Foundation.

The New York Post reported on a potential precedent for a pardon even though Clinton has not yet been charged:

But when President Gerald Ford pardoned his predecessor, Richard Nixon, in 1974, it was for any crimes Nixon might have committed against the US while he was president.

Ford justified his decision by claiming that a long, drawn-out trial would only have further polarized the nation.

Trump said on the campaign trail that he would appoint a special prosecutor to look into Clinton’s crimes and on Wednesday, campaign manager Kellyanne Conway suggested that this was still something that could come to fruition.

Obama absolutely should not pardon Clinton, and if he doesn’t, Trump should follow through with his campaign promise.

It isn’t “political revenge,” as the White House has insinuated, but rather the restoration of law and order, as well as a start toward restoring Americans’ faith in the justice system.

Clinton is a criminal and she should be held to task for her crimes. At the very least, a new administration should investigate. This is something that Obama should be open to, and if his Department of Justice and FBI Director were not politicized, there should be nothing to worry about.

Moreover, we found out that Obama lied about what he knew about Clinton’s server and when he knew it. If he pardons Clinton, it’s to cover his butt, and/or because Clinton has a bunch of dirt on him and they made a deal — which is likely how she became Secretary of State.