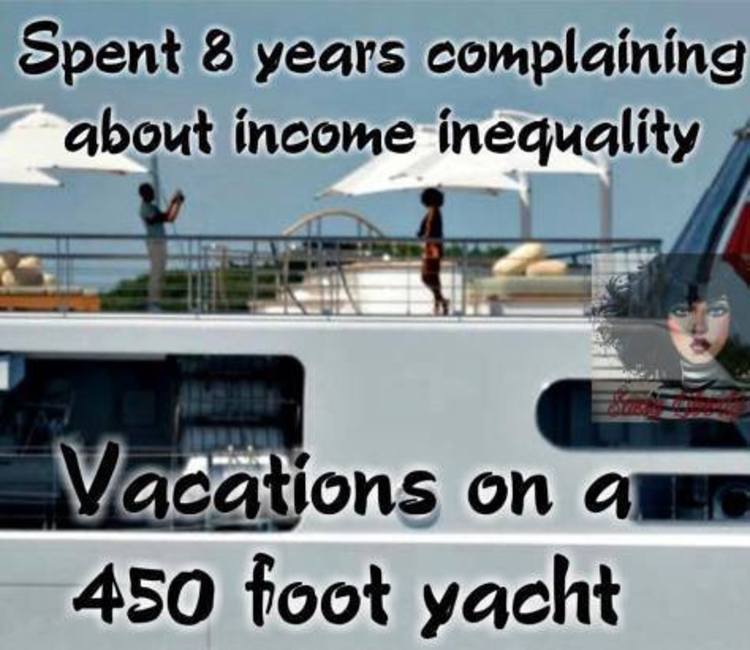 He and Michelle are reported to make a combined $60 million in book deals, but that’s not enough. He needs more.

So he gave a 90-minute interview to a presidential historian and they gave him $400,000. But he needs more.

So he’s going to give a 60-minute speech during a conference attended by fat-cat Wall Street types. And they’re going to give him $400,000. But the rapacious Barack Obama is not done. The agency that represents the two of them is making appointments for them to speak every single week. More. MORE.

Presidents hit the lecture circuit after their stint in the White House. Bill Clinton did it, so did George W. Bush. Ronald Reagan managed to get a $2 million gig in Japan.

But for Barack Obama to be so voraciously vacuuming up money – especially from the same Wall Street types who he had very few nice things to say about while he was in office.

“I did not run for office to be helping out a bunch of fat cat bankers on Wall Street,” Obama said in 2009. Listen:

And right before leaving office, Obama said “I’m not going to Wall Street.”

Even Democrats are slack-jawed at the screaming greed.

Sen. Bernie Sanders said it was “unfortunate” and that it “just speaks to the power of Wall Street.” It sure does.

After hearing about the payout, Sen. Elizabeth Warren said that Obama’s essentially been bitten by a snake.

“Well I was troubled by that,” Warren said. “One of the things I talk about in the book is the influence of money. I describe it as the snake that slithers through Washington.”

Over at The Washington Post, Ruth Marcus is amazed that Obama doesn’t seemed phased one bit by this criticism from his own friends and allies.

“[W]hat is really revolting about all this unseemly money-grubbing isn’t who’s writing the checks, it’s the unnecessary vacuuming of endless sums. Sure, Clinton’s conduct was infuriatingly boneheaded because she knew she might be — at a certain point, she knew she was — running for president. The fact that she was seeking office opened her to suggestion that those signing her speaker’s checks were currying future favor.

Obama, by contrast, is done with electoral politics, at least the kind that have him on the ballot. His office said a portion of his income will go to charity. But is this rapaciousness really the image he wants to cultivate — for himself or for fellow Democrats? Having left his party in such terrible condition, does he really have to offer opponents ammunition to attack him as hypocritical?”

But Marcus thinks Barack Obama has a conscience … at least one that overrides his insatiable greed. I don’t think so. Back in 2010, Barack Obama said “I do think at a certain point, you’ve made enough money.” That Barack Obama wouldn’t recognize this guy.