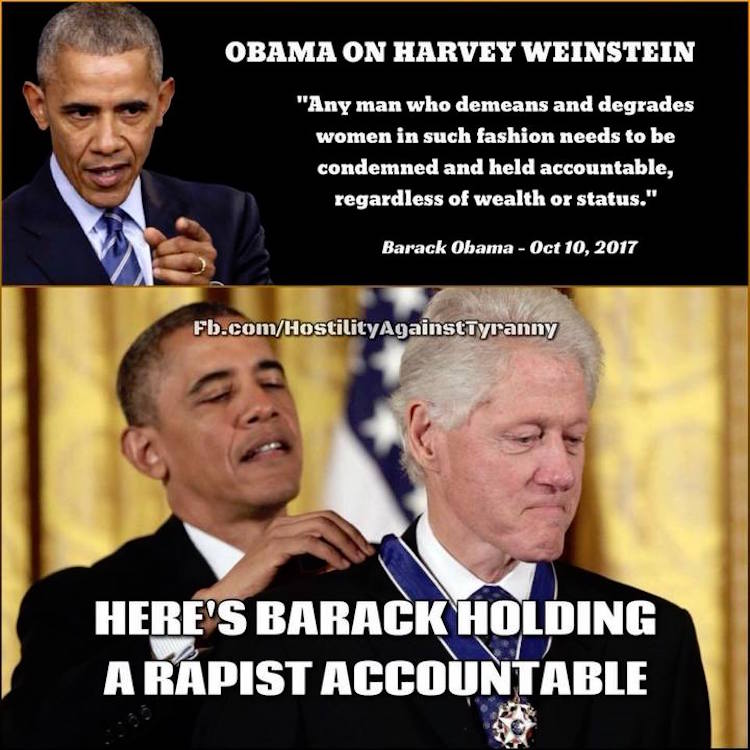 Born with that silver spoon in your mouth and the brain of your mother.

Sorry about that, by the way. I know you can’t help it.

But, I will make fun of you for it. That you can be sure of.

Harvey Weinstein (you know, the Hollywood movie mogul who tried to grope every actress for the past thirty years) has donated to several political campaigns in his time as a creepy human on this Earth.

And, once many of the recipients of those donations found out about it, they started returning the money. The gross, slimy, grope-y money.

Have the Clintons returned their money?

According to The Blaze, the Clinton Foundation and little miss Chelsea Clinton “have so far wanted no part in discussing their Weinstein donations”:

Both Bill and Chelsea Clinton dodged questions over the weekend about Weinstein’s donations to the Clinton Foundation, which total at least $100,000 to $250,000.

Both were asked about the donations while at Northeastern University in Boston for a Clinton Global Initiative event. Chelsea refused to answer the questions while Bill used his Secret Service detail to keep the questions at bay. A reporter from the Daily Mail asked the questions.

A Daily Mail reporter on Saturday asked Chelsea: “Chelsea, will the foundation give back the donations from Harvey Weinstein? Do you plan to return the $100,000?”

According to the reporter, Chelsea “looked straight ahead and ignored the questions as she scurried through the side lot and ducked into her waiting black sedan.” Security further blocked the reporter from asking Chelsea the question again…

…Earlier in the day, Chelsea had ducked the same questions from DailyMail.com after her car dropped her off at the front of the building. When she left the event, Chelsea departed through the isolated side door as her car idled next to it, seemingly to give her a chance to flee quickly.

What was her father’s response? Same same.

The Clintons are used to fleeing reporters whenever they are questioned about The Clinton Foundation and finances.

After all, one only has to look as far back as the election to see the ways in which the media highlighted ALL the suspicion surrounding the organization.

As reported by BBC:

An organisation that brings in billions of dollars in donations from around the world and is operated by an ex-president and a possible future president who served at a high level in another presidency creates all sorts of possible conflicts of interest….

It’s something the Obama White House was keenly aware of when it vetted Mrs Clinton for the secretary of state job in 2009. Before she was offered the Cabinet-level position White House adviser Valerie Jarrett negotiated an ethics agreement with Bruce Linsey, then the head of the Clinton Foundation, that set out a separation between the charity organisation and the State Department.

Mrs Clinton signed a document in which she promised to remove herself from participation in any matter that could have a “direct and predictable effect” on the foundation unless she had a written waiver from the administration.

Despite these paper pledges, Clinton critics assert that the foundation created the possibility that donors could unduly influence Mrs Clinton’s official actions and provide individuals with special access to her.

What kind of actions or access are we talking about?

The 2015 book Clinton Cash by Peter Schweizer laid out numerous examples of Clinton Foundation donations that were followed by State Department actions that were favourable to the donor.

The New York Times, in an April 2015 article, took a detailed look at one such instance.

In 2010 the State Department approved a move by the Russian state-owned company Rosatom to purchase a Canadian mining company with uranium mineral rights on US soil after a bank with ties to the Russian company paid Mr Clinton $500,000 for a speaking engagement in Moscow. The Canadian company in question was founded by million-dollar foundation donor Frank Giustra.

…There have been enough doubts raised about the nature of the ties between the foundation and the State Department, however, that the Federal Bureau of Investigation considered opening a public corruption investigation into the matter.

If the Clintons aren’t concerned about compromising the integrity and security of their own country…do they really care if Weinstein asked Gwyneth Paltrow for a massage?