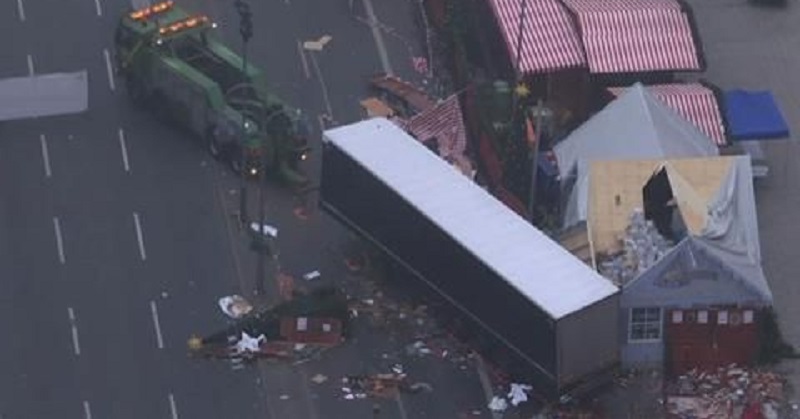 German authorities have been forced to admit they caught the wrong guy when they apprehended a suspect whom they believed responsible for the Christmas Market massacre that killed 12 people and injured another 48.

The 23-year-old asylum seeker in custody was not the truck driver, German media reports. The suspect then remains at large and is concerned dangerous, The Daily Caller reports.

“We have the wrong man, and thus a new situation,” police said in a statement. “The capital’s preparedness police and the special forces have been informed.”

An asylum seeker named Naved B was arrested Monday on suspicion of being the truck driver who committee the atrocity. He denied any participation in the attack.

Overnight, police performed a raid where Naved B. was registered. Four people were questioned and personal items were seized. After several hours, police began to believe they had the wrong suspect.

German Chancellor Angela Merkel said she was “horrified, shaken and deeply saddened” in her first remarks after the attack. The situation would be “particularly painful” if the perpetrator “came to Germany for protection and asylum,” Merkel said.

“I know that it would be particularly hard to bear for all of us if it was confirmed that a person committed this crime who asked for protection and asylum in Germany,” Merkel said. “This would be particularly repugnant in the face of the many many Germans who have dedicated themselves day after day to helping refugees, and in the face of the many people who actually need our protection and try to integrate into our country.”

Germany has been the target of a series of attacks over the last year. If Monday’s attack is confirmed to be terrorism and carried out by a refugee, it will stoke further criticism of Merkel’s decision to allow 890,000 refugees into the country last year.

Nigel Farage, a member of the European Parliament for Britain’s anti-immigration U.K. Independence Party, tweeted, “Terrible news from Berlin but no surprise. Events like these will be the Merkel legacy.”

Terrible news from Berlin but no surprise. Events like these will be the Merkel legacy.

@Nigel_Farage blaming politicians for the actions of extremists? That's a slippery slope Nigel

.@MrBrendanCox @Nigel_Farage
No, Mr. Cox. The perpetrator is a refugee from Pakistan. Merkel opened the door for him.