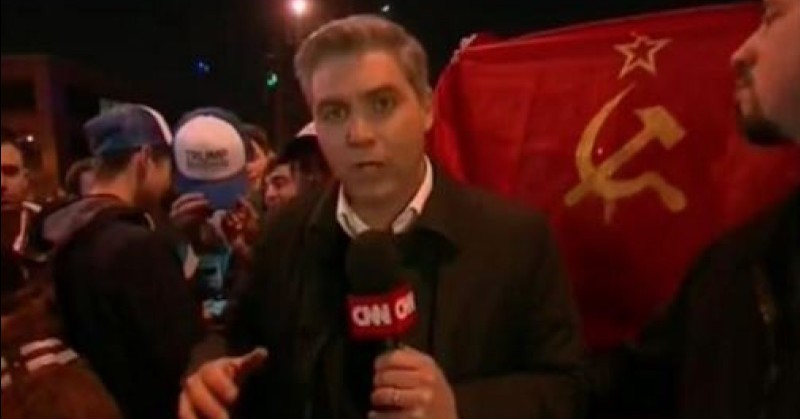 Amidst the screaming, name-calling and flying punches at the anti-Trump protests in Chicago Friday night, one very telling image emerged.

It was during a CNN live shot in the middle of the near-riot. One of their reporters was describing the scene when in the background, we got a blast from the past:

One of the protesters was waving the hammer and sickle flag of the Soviet Union.

We know that Bernie supporters were out there. So were “Black Lives Matter,” Mexican nationalists, and socialists and MoveOn.org nitwits. They all took credit for Trump’s cancellation of the rally.

.@JohnKingCNN on #MoveOn's support of student leaders who organized protest of #TrumpRally in #Chicago.https://t.co/9MOp9UjcKL

Inside the center, protesters shouted “We shut shit down!” and “We stopped Trump.”

But it’s that Hammer and Sickle. That Soviet flag that tells the real story.

The kids supporting Bernie Sanders, the black youth called out to scream and act foolish, even the MoveOn.org liberals who were drawn to protest Donald Trump, they’re all patsies – tools of the radical left.

They’re a traveling group of Maoists, Marxists and “Revolutionary Communists.” They sniff out discontent like dogs to steak and race to pour gasoline on a fire. They were at the WTO protests in Seattle, in Ferguson, were the roots of the Occupy Movement and were in Murrieta, California in 2014. Obama’s buddy and leftist terrorist Bill Ayers was even at the protests.

The whole purpose is to create conflict. The left thrives on conflict and it’s one of the hallmarks of any decent Marxist organization.

Karl Marx’s leftist followers subscribe to the sociological belief that progress – toward a true communist state – is only obtainable through massive conflict and class struggle within capitalist systems.

Harmony and consensus are an anathema to any leftist and like flies to rotting fruit, they will head straight for any demonstration, protest or picket.

These people who are behind the racial and populist unrest in the country have one goal: Destroy the Western political and economic system.

And they’ve got an army of young, naïve Americans who will do their bidding without understanding history or the true nature of their goal.

We got a 15-second glimpse of their goal on CNN. Will they know what that flag truly represents when and if they see it?