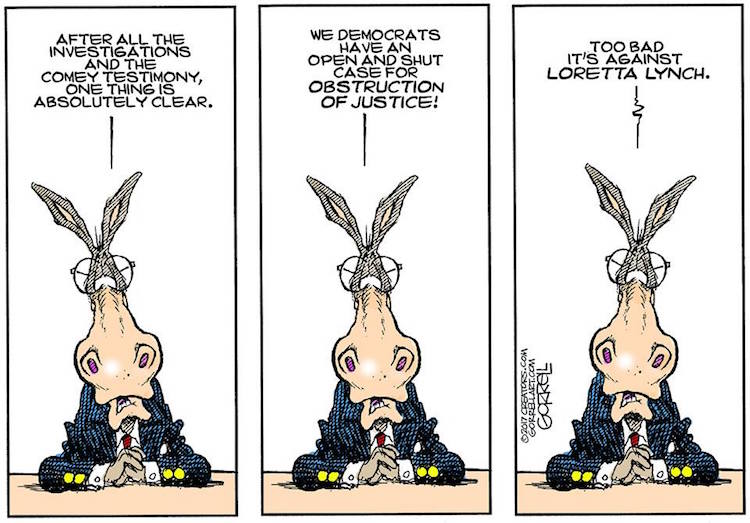 From Robert Gehl: California Sen. Dianne Feinstein said that Congress should look into former FBI Director James Comey’s testimony that Obama Attorney General Loretta Lynch asked him to play down the nature of his investigation into Hillary Clinton’s emails.

Testifying on Thursday before the Senate Intelligence Committee, Comey said that Lynch asked him to call their probe into Clintons emails as a “matter” rather than an “investigation,” something that made Comey “queasy,” he admitted.

“At one point, the attorney general had directed me not to call it an investigation but instead to call it a matter, which confused me and concerned me,” Comey said. “But that was one of the bricks in the load that led me to conclude I have to step away from the department if we’re to close this case credibly.”

Asked on CNN’s “State of the Union” on Sunday, Feinstein said she couldn’t answer the question of whether or not Lynch was trying to provide “cover” for Hillary Clinton.

“I would have a queasy feeling too, though, to be candid with you,” she said “I think we need to know more about that, and there’s only one way to know about it, and that’s to have the Judiciary Committee take a look at that.”

Always a partisan leftist, Feinstein has been known to break with her Democratic colleagues from time to time with issues of foreign affairs and national security. She most recently called for a full-throated investigation into ‘all matters related to obstruction of justice’ in the Trump-Russia affair.