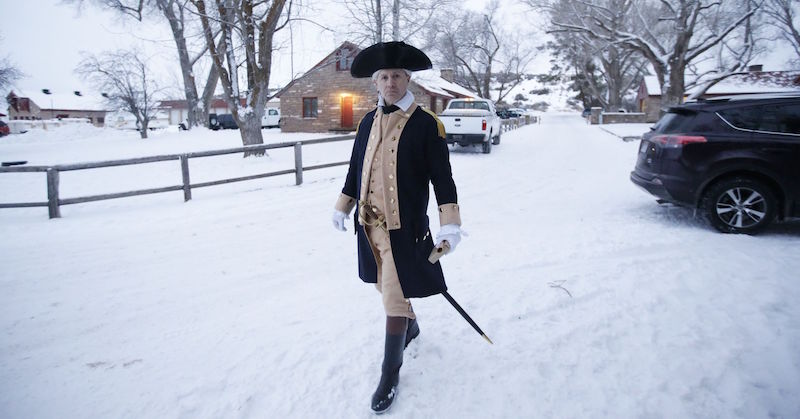 The standoff between an armed militia and law enforcement in an eastern Oregon wildlife refuge must be getting a little boring. Because they’re playing dress-up.

Reporters snapped an image of a man dressed in a Continental Army Officer uniform as he strolled through the Malheur National Wildlife refuge.

Clearly, if patriots and other like-minded supporters plan to hold up in a remote cabin for an extended period of time, one of the things to pack is your Halloween costume.

While he was strolling about, the local sheriff is accusing the group of trying to intimidate federal employees who work in the area.

Harney County Sheriff Dave Ward told a community meeting that Fish and Wildlife employees have said they’ve been followed to their homes, spied on while inside and self-identified “militia members” have approached them, asking them if they’re federal employees.

Law enforcement “will not be intimidated from doing their jobs,” Sheriff Ward said, adding ominously: “There’s an hourglass and its running out.”

The occupation is now in its tenth day and there appears to be no indication that Ammon Bundy and his group are planning to leave any time soon.

There are 16 employees who usually work at the refuge. Some of them have taken administrative leave while others are working from home, Fox News is reporting.

Also Monday, protest leader Ammon Bundy told reporters he and his followers are going through government documents stored inside refuge buildings. Bundy said the documents would “expose” how the government has discriminated against local ranchers who use federal land for cattle grazing.

Bundy said the documents would also help secure the release of Steven and Dwight Hammond, two area ranchers convicted of arson who returned to prison last week to serve longer sentences. The Hammonds’ case set off the protest that led to the occupation.

Wildlife Refuge Spokesman Jason Holm said because the documents and files at the refuge may have personally identifiable information, the agency “is taking necessary steps to ensure employee and family safety.” Bundy said his group is not accessing government computers at the Malheur National Wildlife Refuge, including personnel files.

After the news conference, the group drove in a convoy to a ranch near the refuge and tore down a stretch of government-erected fence. The goal, according to the armed men, was to give the rancher access to the range that had been blocked for years. It’s not clear where the fence was located or which rancher sought the group’s help.

Fish and Wildlife strongly condemned the destruction of the fence and said the action undermines hard-earned conservation impacts achieved in the area.

“Removing fences, damaging any Refuge property, or unauthorized use of equipment would be additional unlawful actions by the illegal occupiers,” the agency said in a statement. “Any movement of cattle onto the Refuge or other activities that are not specifically authorized by USFWS constitutes trespassing.”