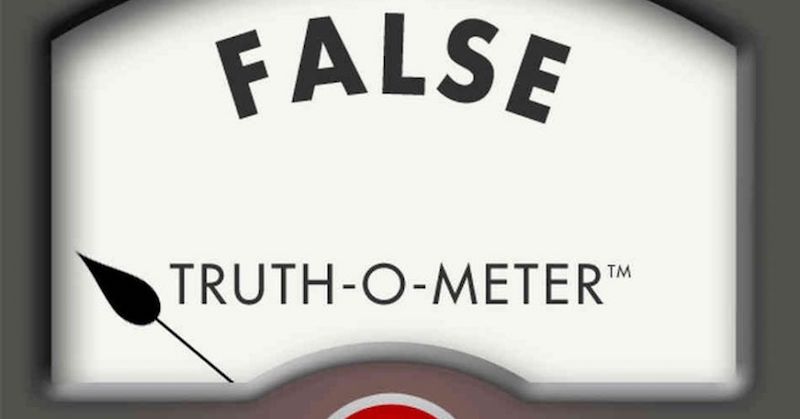 We’ve documented over and over again how politically biased the so-called “fact-checking” site PolitiFact is.

From claiming the exact same statement is both “true” and “false,” depending on whether or not Bernie Sanders or Donald Trump says it, to flat-out lying about the issues, the organization seems to take a decidedly liberal, pro-Hillary turn on every issue.

Related: Guess Who Else Is Involved in Hillary’s “Pay to Play” Scheme?

Now we know why.

Our friends at The Daily Caller have uncovered that the site – officially part of the Tampa Bay Times, (owned by the Poyner Journalism institute) shares a mega-donor with the Clinton Foundation.

The Omidyar Network, started by eBay founder Pierre Omidyar, has given $225,000 to PolitiFact to “fact-check claims about global health and development.” They also gave $1 million to Hillary Clinton’s foundation.

In fact, the Poynter Institute receives money from the eBay mogul in other ways too.

But rather than come out and admit it, they actually deny that they receive any money at all from the Omidyar Network:

“We have never received funding from the Omidyar Network, and we have no connection or relationship to the Clinton Foundation other than covering it,” Sharockman, who is Politifact’s executive director, said.

This is a lie.

Related: Here Are 35 Email Lies Hillary Is Still Telling On Her Campaign Website

PolitiFact acknowledges on their “Who Pays For Us” page that they receive funding from the “Democracy Fund,” yet another group funded by Omidyar.

Yet nowhere in any of the reports PolitiFact has done about the Clinton Foundation do they admit their connection to the non-profit.

And Omidyar is a big donor to the Clintons and to liberal causes. Pierre and his wife have given more than $500,000 to Democratic candidates, causes and campaign committees in recent years, including Obama, Senate Minority Leader Harry Reid, House Minority Leader Nancy Pelosi and a host of Democratic political committees.

Even more incredible? Omidyar is the single largest contributor to the “NeverTrump PAC.” In 2016, the group received $303,550 in money, $250,000 of which came directly from Omidyar.

See how incredibly biased PolitiFact is? You don’t have to look much further than their proclamation in 2009 that Barack Obama was telling the truth when he said “If you like your health care plan, you can keep your health care plan. (They even had to backtrack and acknowledge it was a lie).

PolitiFact gets some things right, but more often than not, when faced with a decision to thump a liberal or conservative for telling a fib, they’ll side with a Trump-thumping.