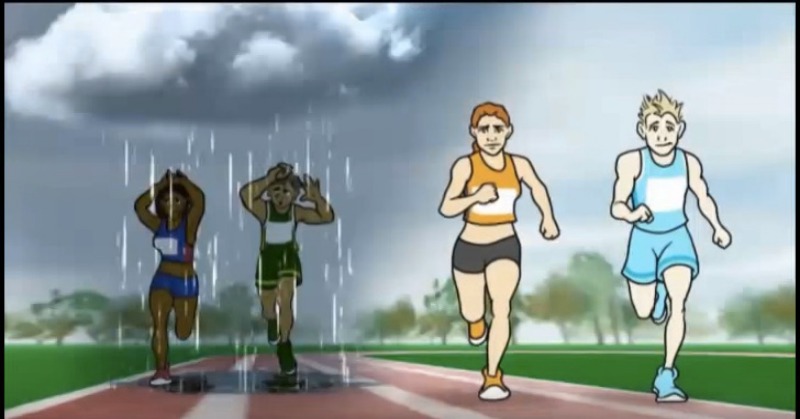 Some parents of Glen Allen High School students are livid after they learned their children were shown a ‘white guilt’ video for Black History Month.

The video, entitled “Structural Discrimination: The Unequal Opportunity Race,” shows four people running a race. While the two white characters have no problems on the track, the two characters of color face hindrances like a police checkpoint, holes, and cages.

It discusses issues like slavery, wealth disparities, school-to-prison pipeline and housing segregation. At the end of the video the phrase “Affirmative Action helps level the playing field” pops up on the screen.

Radio personality Craig Johnson had this to say:

“Dr. King gave his life so that America would be a place where we are judged by the content of our character not the color of our skin. Now we have poverty pimps being led by our current president Barack Obama who all they talk about is the color of skin.”

One parent penned a concerned letter to the school, worried the video might cause unnecessary tension within the students. According to this parent, a tweet on the topic read “Y’all are privileged. Get the *bleep* over it.”

Don Blake, whose granddaughter had attended the assembly, had a different opinion.

“They are sitting there watching a video that is dividing them up from a racial standpoint. It’s a white guilt kind of video. I think somebody should be held accountable for this.”

Johnson demanded that the person responsible for airing the video come forward.

“Force that person to stand on that stage and defend that video. I’m telling you … I will mop the floor with that person.”

After being hammered about the video, Henrico school officials released a statement.

The students participated in a presentation that involved American history and racial discourse. A segment of the video was one component of a thoughtful discussion in which all viewpoints were encouraged. As always, we are welcoming of feedback from students and their families, and we address concerns directly as they come forward.

Watch the video and judge for yourself:

Would you want your children watching that video without your consent? Let us know in the comments!