Multiple religious congregations have sued the state of California over its COVID-19 restrictions, arguing that they broach the First Amendment’s protections on the ability to worship freely. Strip clubs have also gone to court, arguing the limitations curb their right to free speech.

The latter group has succeeded, which might be the most California thing ever. In a ruling dated Nov. 6, San Diego Superior Court Judge Joel R. Wohlfeil wrote that the state couldn’t stop clubs from “being allowed to provide live adult entertainment” in San Diego County, saying that the “harm to plaintiffs if the application is denied is greater than the harm to defendants if the application is granted.”

A week later, according to the Los Angeles Daily News, Los Angeles Superior Court Judge Mitchell L. Beckloff ruled that pretrial discovery could go forward and witnesses could be called in the case against John MacArthur’s church, which has met for in-person services and been slapped with a contempt charge. MacArthur has gone to court as well, although courts there have issued an injunction against his flock meeting.

I know the ruling you get on any constitutional issue can vary extensively depending on what judge you go before. However, let me note that one of the first things you’ll when you go to Grace Community Church’s webpage is a reminder about Adoption Awareness Month.

The first thing you see when you go to Cheetahs Gentlemen’s Club’s webpage — aside from a mountain of airbrushed human flesh — is a video featuring a helmet-less, mask-less woman on rollerblades being pulled behind a golf cart full packed with mask-free people. “This is what we do for quarantine at Cheetahs,” the caption beside the video reads. (It must be noted they showed enough restraint to keep their clothes on.)

At present, it seems the courts think Cheetahs can apparently socially distance more effectively than Grace Community Church. If only John MacArthur had rollerblade-surfed behind a golf cart.

Well, Godspeak Calvary Chapel pastor Rob McCoy figured that if you can’t beat ’em, join ’em. While his flock isn’t in San Diego County — they’re up in Los Angeles-adjacent Ventura County — the ruling in San Diego could theoretically be applied to the rest of the state. After all, it’s the same state and the same amendment.

So, he decided to turn his church into a “strip club” to stay open.

McCoy is another pastor who has continued in-person services in spite of a court injunction, according to the Ventura County Star. They’ve also faced a filing of contempt.

However, during last Sunday’s sermon, he said he found inspiration in how to beat the injunction from former Arkansas Gov. Mike Huckabee.

“Generally, they’re a fairly safe place, and I would think it’s ridiculous to say that people are safer in a strip club than they are at church.”

Huckabee said that churches should simply “announce their pastor will remove his tie during the sermon, and therefore he will take off an article of clothing making it a temporary strip club so that people will be able to go to church.”

McCoy did him one better, engaging in a clean version of a strip tease before taking off the tie:

Crass? Perhaps. Not nearly as much as Cheetahs Gentlemen’s Club — and while we Christians are called not to descend to their level, we can — and should — also mock the absurdities of the secular world, as well.

Yes, the lower courts act in a patchwork manner and it’s difficult to make a 1:1 comparison unless the same judge issued different rulings when it came to Grace Community Church and Cheetahs Gentlemen’s Club. If California’s religious congregations can venue-shop, one hopes that someone has figured out a way to engineer it so their suit against the state ends up in front of Judge Wohlfeil — because from a purely utilitarian perspective, churches, mosques and synagogues represent the ultimate situation where the “harm to plaintiffs if the application is denied is greater than the harm to defendants if the application is granted.”

At the very least, it represents the same issue at heart.

The First Amendment in full: “Congress shall make no law respecting an establishment of religion, or prohibiting the free exercise thereof; or abridging the freedom of speech, or of the press; or the right of the people peaceably to assemble, and to petition the Government for a redress of grievances.” The freedom of speech and the prohibition against the prohibiting the free exercise of religion are coequal.

According to Fox News, the Harvest Rock Church in California has petitioned the Supreme Court for an emergency injunction against the state’s coronavirus laws, which currently prohibit in-person services for counties in the most restrictive “purple tier.” At present, 94 percent of the state’s population lives in “purple tier” counties.

Their petition isn’t tied to strip clubs, but instead to the stringent guidelines religious congregations have operated under since COVID-19 restrictions were first issued. Meanwhile, liquor stores and cannabis dispensaries, inter alia, have been allowed to keep their doors open.

“For over nine months, the Governor has continued to discriminate against Churches’ religious worship services while permitting myriad nonreligious entities to continue to gather without numerical restrictions inside the same house of worship and in other external comparable congregate assemblies,” Harvest Rock Church argued in its filing.

For good measure, the filing also referenced California Gov. Gavin Newsom’s field trip to a Napa Valley restaurant and said he had been “publicly encouraging and supporting mass protestors, rioters, and looters to gather without numerical restriction in blatant disregard for his own Orders.”

This is probably a more sound legal basis to go on if one wishes to thumb one’s nose at the state of California, particularly given the Supreme Court’s 5-4 decision Wednesday to strike down New York Gov. Andrew Cuomo’s restrictions on religious congregations.

However, if you want to make an absolute mockery of where the Golden State is in 2020, a pastor’s necktie strip tease will do nicely.

McCoy’s sermon, by the way, dealt with persecution of the church under COVID-19. It’s worth listening to. Lawmakers in Sacramento weren’t going to.

They’ll notice this, however. 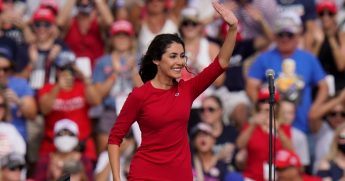 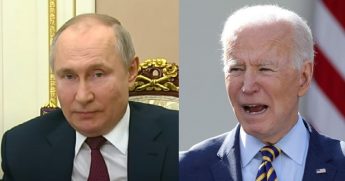 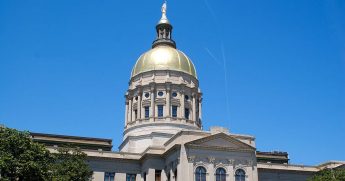 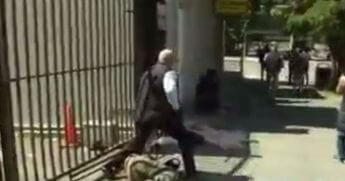