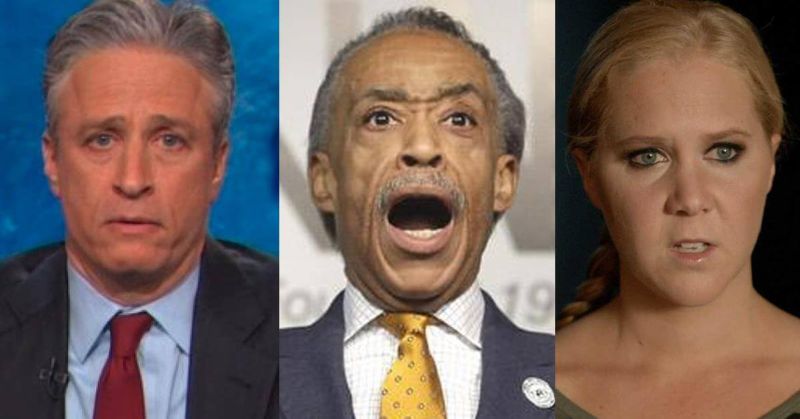 The list of adjectives — liberals, hypocrites, greenies, tree huggers, etc. — that can be used to describe many if not most members of the Hollywood entertainment industry just grew by one more: “liars.”

Maybe they got caught up listening to their own liberal brethren in the news media, whose polls and reports had their candidate of choice, Hillary Clinton, not only winning the election but winning in landslide fashion. Or maybe they thought bold declarations would motivate their fans. Whatever the reason, no small number of them got over-confident, shot their big fat mouths off, and now are looking like fools.

Here’s a partial list of celebrities who made pre-election vows to leave the United States if Donald Trump won, but now that Trump is our president-elect, have (not so) mysteriously changed their relocation plans:

In March Lopez, who is Mexican-American, tweeted out a gruesome image of Mexican drug lord Joaquin “El Chapo” Guzman holding the decapitated, severed head of Donald Trump. Many tweeted to Lopez that he’d crossed a line — most of whom Lopez told to “f*** off.”  In July Lopez informed the world that if Trump was elected he and all Mexicans would go back to Mexico. Last month he informed Trump that he could “Suck My A**.“ Real class act this guy is.

Now that Trump has won, is Lopez really headed back to Mexico? Not so much. In a post-election tweet Lopez said “I’m gonna stay and see how you f*** this up.”

Cher hasn’t been relevant since co-hosting a 70’s variety show with her conservative husband, the late Sonny Bono. Forget leaving the U.S., she managed to one-up all others by claiming she’d actually leave the planet if Trump won.

Is Cher on her way to Uranus? No, she’s taken the low road, laying the blame for her lying ways at the feet of her aged mother. After the election she tweeted “Told my mom I was leaving and she cried. She’s 90. Maybe people on your side don’t care about your moms.” The classiness of this crowd knows no bounds.

Speaking of classy, Cyrus — who performs simulated sex acts on stage with giant inflatable penises — routinely criticized Trump for “sexist objectification of women” and vowed to “move out da country” if Trump won. In a March Instagram post Cyrus said, “I am moving if he is president” and “I don’t say things I don’t mean.” Apparently she does.

“If we want Donald Trump to accept us…. We must be accepting toward his presidency and his promise to ‘unify’ our country and “make America great. Happy hippies, we adjust and we accept everyone who they are and so Donald Trump, I accept you and deserve to say that I even accept you as the president of the United States and that’s fine.”  A bit more conciliatory than “I’m leaving the country?”

The comedian claimed in May that she had bought a house “in another country just in case.” Apparently she wasted her money because, like the others, after the election she reversed course.

Handler’s explanation is golden. Why is she not leaving the USA? For the good of the nation: “Yesterday my staff reminded me that voices and platforms like mine are needed more than ever; leaving the country is quitting #keepfightin.”

Funny thing is, six months ago on “Live with Kelly and Michael” Handler said, “So all these people that threaten to leave the country and then don’t—I really will leave that country.” That, Chelsea, makes  you one of “these people”. It makes you a liar.

Can’t forget good ‘ole Al. Al pledged to leave the country if Trump won and added the finishing touch of “he’d probably have me deported anyway.” Since Sharpton was born in New York City it’s unclear exactly where Trump would deport him to. Nevertheless, Al has backtracked, claiming he was only joking and has to stay so he can continue the fight.

Still a fixture on a show nobody watches, earlier in the year the girls of “The View” were discussing Trump and Whoopi chimed in with, “Maybe its time for me to move.” That was then, this is now.

Goldberg now claims she was misunderstood and isn’t going anywhere: “I’m sorry to disillusion you, but I’m not leaving the country that I was born and raised in. …You don’t get to tell me that I’m going. You don’t get to make that decision for me. I’m staying.” Fine, Whoopi, but why make the comment that you’re leaving in the first place?!

Speaking of class acts. Not only a liar about his relocation plans Jackson, also tops the I-can’t-complete-a-thought-without-cursing-every-third-word list.  Pre-election on Jimmy Fallon’s show, Jackson had the following to say: “If that motherf***** becomes president, I’m moving my black a** to South Africa.”

He now claims he was merely playing a role in a skit.

With Trump steaming toward inauguration day, Jackson’s tune has changed to, “When you learn the difference between my actual opinion and a Kimmel skit maybe we can talk. Till then, I’m barbed wire up your (expletive deleted). The last time I survived Jim Crow I was poor, guess what (expletive deleted) not this time.”

As expressed in an interview on BBC prior to the election, Schumer had her sights set on London. She now says her comments about moving to Europe were made “in jest,” and went a step further by doing what today’s liberals seem to enjoy most – calling all who disagree with her nasty names.

“Anyone saying pack your bags is just as disgusting as anyone who voted for this racist homophobic openly disrespectful woman abuser” was posted on her Instagram.

Read More:
CBS News: Cher says if Trump wins she’s going “to have to leave the planet”
Breitbart: 16 Celebrities Who Will Leave the U.S. if Trump Wins
IB Times: If Donald Trump Wins Presidency, These 18 Celebrities Will Leave US: Will Canada Be Their New Home?
Townhall: These 23 Celebrities Said They’ll Leave The Country If Trump Wins

This list is not exhaustive; others who claimed they would leave the country but are now backtracking include Neve Campbell, Lena Dunham, Spike Lee, Amber Rose, Jon Stewart, Barbra Streisand, and others.

It’s doubtful, but hopefully these lying hypocrites have learned a lesson. Hopefully they’ve come to realize a simple truth – there is no better nation on earth in which to live than this one. If there was, then you wouldn’t have broken your word about leaving. But if any of you want to re-re-change your mind, feel free to pack your bags and go.