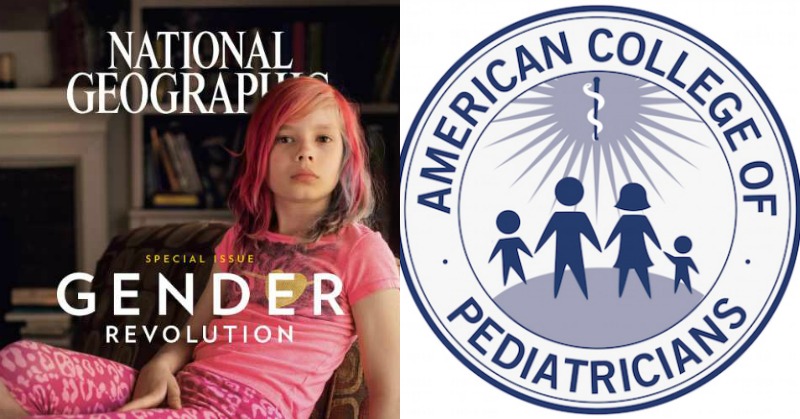 Pediatricians have spoken out against National Geographic’s decision to put a young child with gender dysphoria on the cover of the magazine to promote the transgender agenda in spite of the child’s well being.

An association of pediatricians is condemning National Geographic over its decision to put a 9-year-old child who identifies as transgender on the cover of its January issue.

National Geographic will be highlighting the “gender revolution” for its January 2017 issue, featuring Avery Jackson, a 9-year-old child, the first appearance of a transgender person on the publication’s cover.

Avery is quoted on the cover stating, “The best thing about being a girl is, now I don’t have to pretend to be a boy.”

Since the child began to identify as a girl at the age of three, Avery’s parents have remained avid supporters. Avery’s mother, Debbie Jackson describes her and Avery’s father’s feelings of confusion and doubt at the beginning of the process in a video statement: “Until that point she was quite a rough-and-tumble little boy with a buzz cut and a shark tooth necklace. But when she was three, she asked her dad and I if we could buy her a princess dress.”

Jackson explains not buying Avery a dress at first because they thought it was just a phase, but when they found out their son was wearing his favorite dress at daycare they went and bought him a princess dress. According to Jackson, Avery wore that dress every moment while at home, and eventually asked for more: dresses, nightgowns, headbands, and sparkly shoes. But his parents drew the line at girl underwear.

After meeting with a psychologist and endocrinologist, and ruling out any hidden medical issues, Avery was allowed to go to school dressed as a girl. Jackson and her family lost friends and family members and went “into hiding” for a year while Avery “grew out her hair to look like the girl she is,” Jackson explains. When the family emerged, “it was with a very happy and confident daughter.”

Michelle Cretella, MD, president of the American College of Pediatricians, explained to LifeSiteNews that National Geographic is “promoting a political agenda over science and the wellbeing of innocent children” with their magazine cover.

“’Affirming’ so called transgender children means sterilizing them as young as 11years old,” said Dr. Cretella. “Puberty blockers plus cross-sex hormones causes permanent sterility. And biological girls who ‘transition’ to male by taking testosterone may have a double mastectomy at age 16. The life time use of cross-sex hormones also puts these children at risk for stroke, heart disease, diabetes, cancers and more.”

The decisions some parents are making about their young children’s gender dysphoria is both unethical and harmful because of the likelihood that it’s a phase which often passes if it is allowed to, and not interfered with unnaturally.

“When a child under the age of 12 thinks they are the opposite sex and is allowed to naturally pass through puberty, 75%-95% of the time that child will accept his or her biological sex by the late teen years” Cretella said.

Cretella’s perspective is a welcome change from the insanity promoted by the liberal mainstream media, such as National Geographic exploiting a child to promote the transgender agenda in the most high-profile way they ever have.

Cretella argues that public support of “transgenderism” in children is tantamount to “child abuse.” “When academic, medical and other public institutions propagate the lifetime use of toxic hormones and the surgical removal of healthy body parts as healthcare for children they are engaged in institutionalized child abuse,” she said.