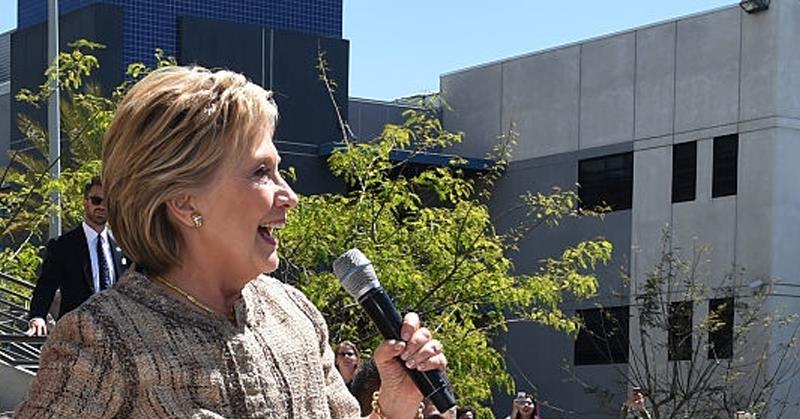 Take a look at the photo below:

US Democratic Presidential candidate Hillary Clinton speaks to the overflow crowd who were unable… https://t.co/qnzzDj2xkL

Here’s the thing: This is not the first time that Clinton has been seen requiring help to accomplish the most simple of tasks.

Take a look at this photo from February, when she needed assistance to walk up a flight of stairs:

Moreover, just last week during an event in Las Vegas, Clinton froze like a deer in headlights when a couple of animal activists in the crowd began heckling at her.

Take a look at the footage below:

Evidence like this lends credence to the theory that there is something seriously wrong with Clinton’s mental or physical health.

Add to all this Clinton’s coughing fits, her long bathroom break, and her “short-circuit” comment from last week, and it becomes more and more clear that something is just not right about her.

Moreover, last January. Dr. Drew Pinsky publicly shared his concerns about her health, speculating that she might be suffering from long-term health issues due to a concussion and blood clot that she allegedly suffered sometime in the past.

And just this week, the executive director of the Association of American Physicians and Surgeons made a bombshell statement about Clinton’s health, according to Breitbart, stating that her recent behavior is “very concerning“:

Videos widely circulated on the internet are, if authentic, very concerning. One shows prolonged, inappropriate laughter; another, strange head movements. In a third, she appeared momentarily dazed and confused, and lost her train of thought.

Is something wrong with Hillary Clinton? I don’t know, and neither do you. As citizens of the United States of America, however, we deserve to know — especially since she happens to be running to be our next president!