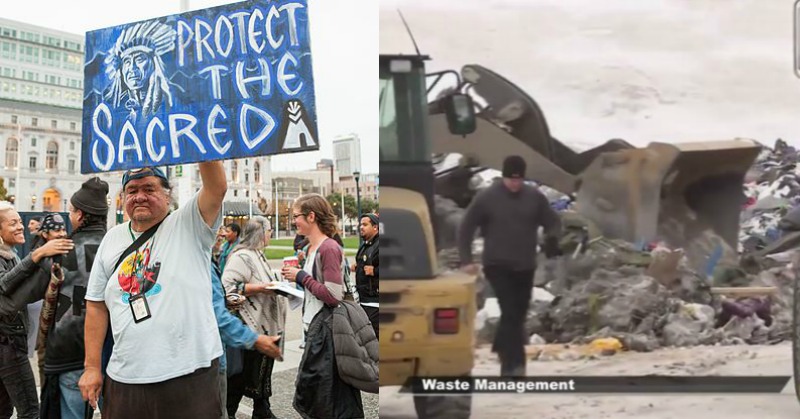 As the Standing Rock protests come to an end after the Army Corps of Engineers denied Energy Transfer Products (ETP) a permit to construct part of the Dakota Access Pipeline amid fear, in part, of contaminating the Missouri River, the “sacred site” now faces another danger — garbage left from the oh so virtuous protesters.

The Standing Rock Sioux were reportedly concerned that the pipeline could have polluted their source of drinking water — the Missouri River — but now the garbage left behind by the virtue signaling protesters poses the threat; but lo and behold, they’re by and large no where to be found.

Those involved in the clean-up effort, led by the Standing Rock Sioux, say it could take weeks for private sanitation companies and volunteers to clear the expanse of abandoned tents, teepees, sleeping bags, blankets, canned food, supplies and just plain garbage littering the Oceti Sakowin camp.

The Bismarck Tribune: Cleanup with machines is emotional for some
———-

Standing Rock Sioux tribal chairman Dave Archambault II had to beg people still at the camp to clean up the mess:

Please, once again, we ask that people do not return to camp… The fight is no longer here, but in the halls and courts of the federal government. Here at the camp, those who remain should be working together to help clean and restore the land.

Remember when the Tea Partiers famously picked up after themselves during their actual peaceful protests? I wonder how much coverage time the liberal mainstream media is going to devote to this literal mess, vs. the time they spent trying to dig up figurative “garbage” on the Tea Partiers?

Such is the hypocrisy of the Left.