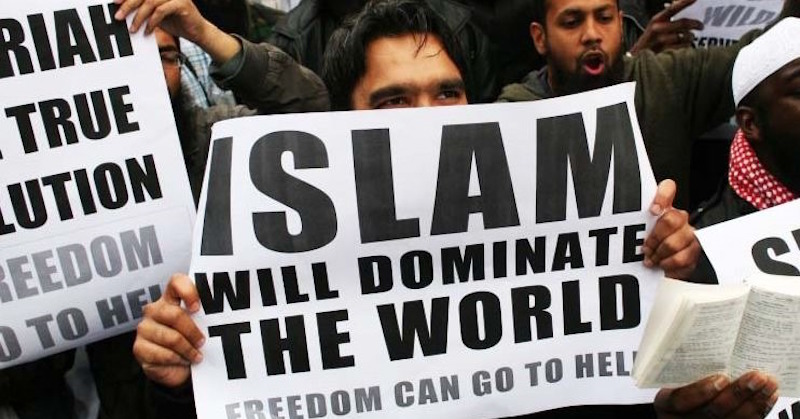 Islam – as practiced today by millions of followers – is wholly incompatible with Western democracies.

It’s a “theological, political problem” that will pose a dangerous and increasing threat in the very near future, says a political scientist at Hillsdale College.

Professor Matthew Spalding said his professional mission is to remind Americans of their country’s “noble founding principles” and what makes America “exceptional.”

The focus that liberals have of “multiculturalism,” “tolerance” and eroding traditional notions of marriage and the family have put us at a crossroads, he said in a lengthy interview with The Daily Caller’s Ginni Thomas.

Muslims do not tolerate the religious liberties of others, a belief that is antithetical to American values, Spalding said. Ashockingly large

number of American Muslims believe sharia law should be the law of the land in the U.S. and that violence against “those who offend the prophet Mohammad” is legitimate.

The choice we face is between a limited constitutional government that grants maximum liberty and opportunity to the people, Spalding says, allowing civil society to flourish apart from government, or a burgeoning active, modern administrative state that is sold as “progress” but is non-responsive to anyone but the political elites.

Interviewed in mid-December at Hillsdale’s Kirby Center in Washington, D.C., Spalding fears too many citizens are unfamiliar with what has set America apart and the stakes of this political battle.

Asked for the best criteria he would suggest for citizens to choose a new statesman for president in 2016, Spalding named two. He says the next leader should understand the nature of the crisis America is facing, and be able to lay out solutions and strategies for addressing that crisis. Spalding calls for a national dialogue on who we are, where we are going and how we will alter the course America is on.

Hillsdale College, which refuses federal subsidies because of unwanted federal interference, has been keenly aware of progressive meddling and government control of education. Spalding speaks of the elites as similar to a science fiction “blob” that won’t stop until it controls higher education, K-12 and now pre-school — reminding us that progressives since John Dewey have worked to control the formation of citizens.

With progressives now dominating our government and culture, Spalding believes in hindsight that the definitive cultural indicator progressives won was the erosion and collapse of traditional marriage and family. Progressives have been jealous of the power of families and religion, making them a longtime target of those who wish to have the government the arbiter of all rights, he says.

In this 29-minute exclusive video interview for The Daily Caller News Foundation, Spalding says — despite the name calling by the left — it is they who are pulling us back to a dark historical time before the American experiment granted rights and opportunities to the citizens, apart from kings and rulers.

He gives low grades to the Republican Congress that continues to grant excessive power to the growing administrative state that writes ever-more prescriptive regulations — regulations that are the proper prerogative of the legislative branch since they are most accountable to the citizens.

Instead, Congress has allowed its muscles to atrophy, Spalding says. The question will be how new leaders in Congress can turn the whole ship to restore the proper separation of powers to our government, he explains.