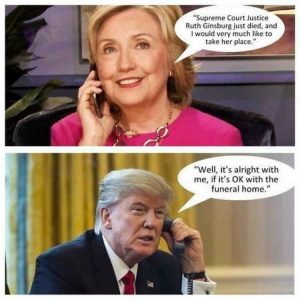 Robert Gehl reports when she was Secretary of State, Hillary Clinton was to give a big speech on human rights at a women’s university in Saudi Arabia.

Apparently wanting to vet the speech for anything incendiary, Hillary’s speechwriter, Case Button, gave a copy of it to Huma Abedin’s mother, an Islamic activist who also teaches at the school, The Daily Caller is reporting.

Huma’s mom, Saleha Abedin, replied that the speech needed “major edits and corrections,” removing such things as “democracy,” “freedom,” and references to the “empowerment of women.”

Clinton’s speechwriter apparently took the advice … despite the fact that Clinton herself has built her political brand on precisely those core values. The transcript of the speech she ended up giving at Dar Al-Hekma contained none of those references.

This discovery was made by Judicial Watch, a conservative group that has sued the State Department for copies of the emails from Clinton to her closest associates.

The email chain begins in February 2012, when Button contacted Abedin to review a speech she was to give in a few days.

She then provided the speechwriter with a list of five corrections for the speech, all of them pushing back against the ideals of democracy and freedom.

“Do not use the political terms such as ‘democracy/elections/freedom,’” Saleha instructed her daughter.

The other suggestions included:

We don’t know what the rough draft of the speech looked like, but it must have been dramatically different from the one she actually gave.

Despite the fact that Saudi Arabia is one of America’s allies (for the most part), the Islamic regime is also one of the most oppressive. Women are routinely mistreated and subject to brutal punishment for perfectly innocent things that are commonplace in the west, like choice of clothing or driving a car.

But the biggest reason Clinton might not have wanted to irritate the Saudis: the kingdom has given more than $10 million over the years to the Clinton’s private charity, the Clinton Foundation.

Clinton folded. Did she raise a fuss when she was told she couldn’t mention “enabling women” or even “empowering” them? Did she bristle at the notion that she couldn’t use words like “democracy” or “freedom”? Or did she only see dollar signs that made her willing to sell her morals and principles down the river so the cash could keep flowing?

Clinton has a lot to say about “women’s rights” when the reprocussions don’t come with a monetary penalty. When they do – she shuts that big piehole of hers.

What do you think? Should Clinton have given the speech anyway? As President, would Donald Trump shy away from making “controversial” statements like this to our allies?