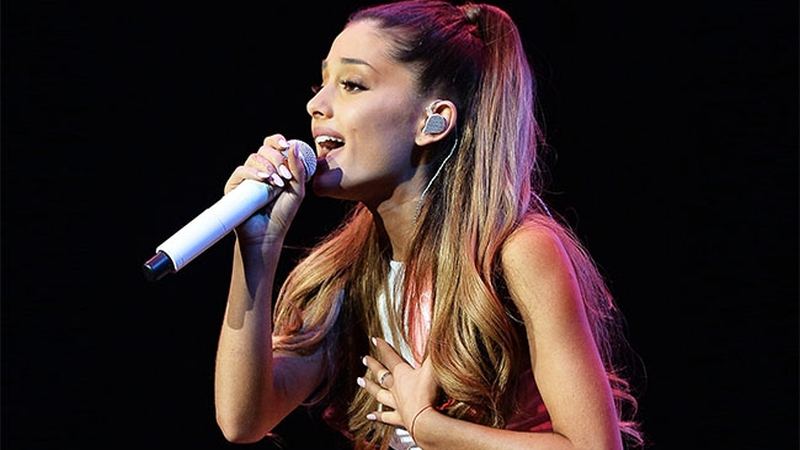 Singer Ariana Grande was captured on surveillance footage over the July Fourth weekend contaminating donuts and blasting the U.S.

Video obtained by celebrity-gossip website TMZ shows Grande, accompanied by one of her new boyfriend/backup dancer, licking donuts on display as the worker is in the back preparing a fresh batch, then continuing with trashing the country that made her famous.

The Grammy-nominated singer, who is an avid Hillary Clinton supporter, seemed very amused by her disrespectful actions as she laughed and smiled after licking the pastries multiple times as an oh-so-clever joke.

The worker is then seen in the video placing a fresh batch of donuts on the counter, but the bratty pop star wasn’t pleased.

The Grammy-nominated artist apologized Wednesday for saying she hates America, claiming she’s actually “EXTREMELY proud to be an American” and was just upset about the obesity in America.

She, however, did not seem to think contaminating the donuts with her saliva was an issue, as she didn’t mention the incident once in her pathetic apology.

I am EXTREMELY proud to be an American and I’ve always made it clear that I love my country. What I said in a private moment with my friend, who was buying the donuts, was taken out of context and I am sorry for not using more discretion with my choice of words.

As an advocate for healthy eating, food is very important to me and I sometimes get upset by how freely we as Americans eat and consume things without giving any thought to the consequences that it has on our health and society as a whole.

The fact that the United States has one of the highest child obesity rate in the world frustrates me.  We need to do more to educate ourselves and our children about the dangers of overeating and the poison that we put into our bodies.

We need to demand more from our food industry. However I should have known better in how I expressed myself; and with my new responsibility to others as a public figure I will strive to be better.

As for why I cannot be at the MLB show, I have had emergency oral surgery and due to recovery I cannot attend the show. I hope to make it up to all those fans soon. That being said let me once again apologize if I have offended anyone with my poor choice of words.”

But Rob Lowe (like many of us) isn’t buying it. Calling her apology ‘lame’, the famous actor tweeted his sarcastic reaction to the young star’s actions.

As my grandpa would say: “Yeah, sure. Pull the other leg, it plays jingle bells!” #Lame https://t.co/4rnj6e4ZYa

I loved Rob Lowe in Parks and Recreation and seeing him call out a spoiled brat when he sees one only makes that admiration grow.

No matter what Ariana’s PR team comes up with to defend her, there is absolutely no excuse for anyone to say they hate the land of the free and the home of the brave.

Americans, both fat and skinny, are the ones that have made her famous and given her her billions. She needs to get off her high horse.