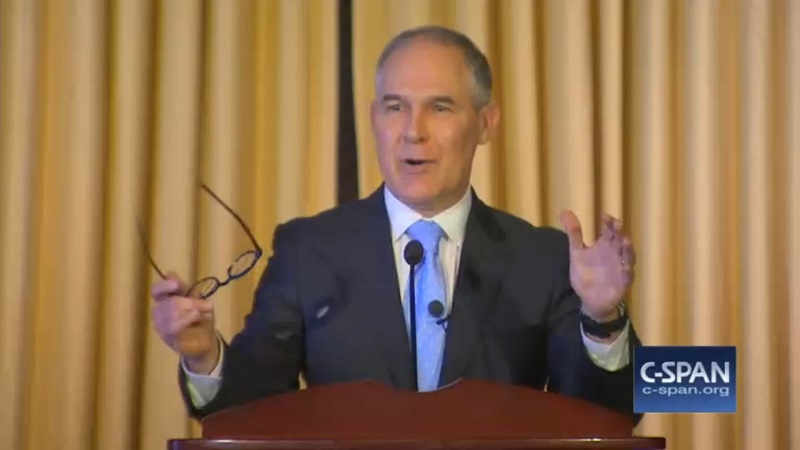 Before a glum audience, Scott Pruitt tried to lighten the mood with small talk about baseball … but when the rubber hit the road, the new EPA Administrator came with a message:

He said that rather than serve as antagonistic agencies to state and local jurisdictions, the EPA need to serve as partners in protecting our national resources.

This will be a dramatic departure from the EPA of the last eight years under Barack Obama, who has used the EPA to regulate massive swathes of land, water and resources, placing them out of reach of state control.

But under Pruitt and President Trump, times are changing.

President Donald Trump’s executive orders will officially be rolled back the Obama-era policies on climate change and water pollution.

During a speech as the newly-minted EPA Administrator, Pruitt had largely positive things to say, but the crowd of career bureaucrats looked glum, knowing that change was coming.

According to media reports, several executive orders have been outlined. One of them instructs the EPA under Director Pruitt, to begin rewriting the 2015 regulations that limit greenhouse gas emissions from existing electric utilities. It will also instruct the Bureau of Land Management to lift a ban on federal coal leasing.

A second order will order the EPA and Army Corps of Engineers to rewrite the “Waters of the United States” rule that applied to 60 percent of all water bodies in the country. That regulation – issued in 1972, gave the federal government broad authority over not only major bodies of water but wetlands, streams and rivers that fed into them.

Critics were livid that it effectively shut down all use along America’s waterways. It affected all development as well as farming on the grounds that they could pollute the smaller bodies of water that flow into larger ones.

Trump has joined many industry groups in criticizing these rules as examples of the federal government exceeding its authority and curbing economic growth. While any move to undo these policies will spark new legal battles and entail work within the agencies that could take as long as a year and a half to finalize, the orders could affect investment decisions within the utility, mining, agriculture and real estate sectors, as well as activities on the ground.

Trump, who signed legislation last week that nullified a recent regulation prohibiting surface-mining operations from dumping waste in nearby waterways, said he was eager to support coal miners who had backed his presidential bid. “The miners are a big deal,” he said Thursday. “I’ve had support from some of these folks right from the very beginning, and I won’t forget it.”