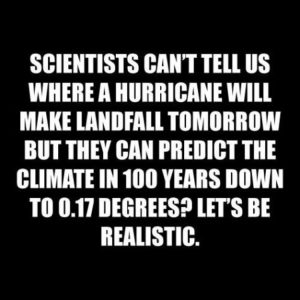 Kimberly Morin reports yet another study shows that Climate Change Cultientists are full of &^%* yet again.

Actual climate scientists used a model to simulate what temperatures were since the 1800s using information from as far back as 50 A.D. From the Daily Caller:

The ANN system is a “form of machine learning: think big data and artificial intelligence,” which she says has been used to more accurately predict rainfall than models used by Australia’s meteorological agency, Marohasy wrote in a blog post.

“The difference between output from the ANN models and the proxy records is at most 0.2 °C; this was the situation for the studies from Switzerland and New Zealand. So, we suggest that at most, the contribution of industrialization to warming over the twentieth century would be in the order of 0.2°C,” she wrote.

Their findings challenge the mainline conclusion of the Intergovernmental Panel on Climate Change (IPCC), which also found the Earth warmed about 1 degree Celsius since before the industrial revolution. The IPCC just attributes all that warming to humans.

Essentially, after their plugging of data into the model using historical records, they discovered that the Earth’s temperatures would have warmed regardless of mankind. From Spectator:

Our results show up to 1°C of warming. The average divergence between the proxy temperature record and our ANN projection is just 0.09 degree Celsius. This suggests that even if there had been no industrial revolution and burning of fossil fuels, there would have still been warming through the twentieth century – to at least 1980, and of almost 1°C.

The Intergovernmental Panel on Climate Change, relying on General Circulation Models, and giving us the Paris Accord, also estimates warming of approximately 1°C, but claims this is all our fault (human caused).

Basically, the Climate Change Cultientists and the ignorants on the left have convinced the United States and multiple other countries to literally WASTE trillions of dollars on a theory that has been proven over and over again to be inaccurate.

Not only have trillions of dollars been wasted around the world but regulations have caused pain to businesses and killed jobs in some sectors while propping up useless jobs with tax subsidies in the “green sector,” all for nothing.

Yet Al Gore and his merry men of stupid will continue to claim their Cultientists are correct in their debunked assumptions and if you don’t agree with them, you hate the planet.

Climate change has been ongoing since the day Mother Earth was born. There have been multiple studies and charts that show the climate changing over time that had nothing to do with humans but the Cultientists continue to ignore this data and sometimes even intentionally falsify it so they can continue to drain the taxpayers of their hard-earned dollars as an attempt to keep themselves relevant and employed.

The chart below from the latest simulation says it all:

The average divergence between the proxy temperature record from this Northern Hemisphere composite, and the ANN projection for this period 1880 to 2000, is just 0.09 degree Celsius. This suggests that even if there had been no industrial revolution and burning of fossil fuels, there would have still been some warming through the twentieth century – to at least 1980. 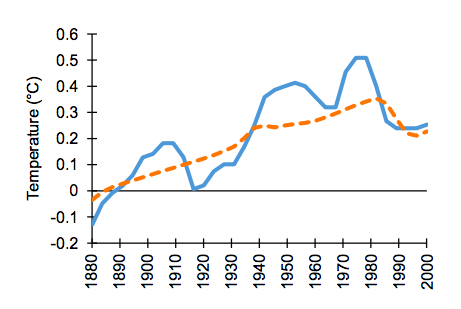 It’s time to end the Climate Change Cult once and for all.