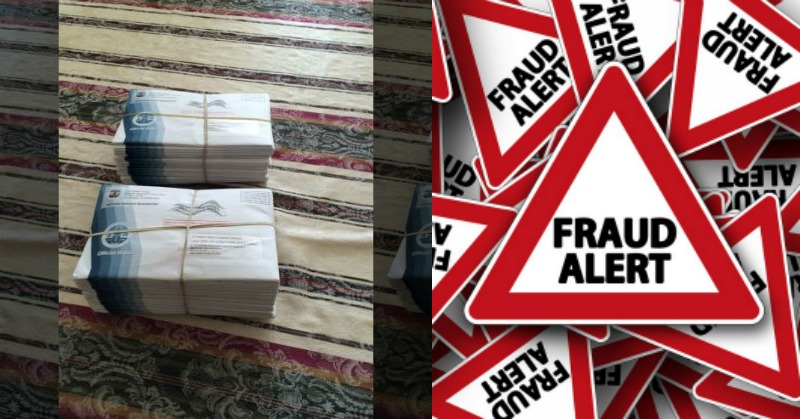 In San Pedro, California, Jerry Mosna found two big stacks of ballots on top of his mailbox on Saturday that were addressed to his 89-year-old neighbor’s residence, but to different people.

Among these two stacks were 83 ballots for the 2016 election. Mosna’s wife, Magdalena, told Fox News that their elderly neighbor lives by herself and that “Eighty people can’t fit in that apartment.”

First, the Mosnas took the ballots to the Los Angeles Police Department, who then directed the couple to the post office. They were told that there would be an investigation, but they were still concerned so they contacted another neighbor, John Cracchiolo, for assistance.

Cracchiolo contacted the Los Angeles County Registrar’s office and told Fox News: “Yes, there is voter fraud. We saw it with our own eyes.” Both Cracchiolo and Mosna told FoxNews.com that they believe what they saw was a case of voter fraud.

The office of the registrar released a statement:

We are carefully reviewing our records and gathering information to fully identify what took place.  Our preliminary assessment is that this appears to be an isolated situation related to a system error that occurred causing duplicate ballots to be issued to an address entered for a single voter. We are working directly with the system vendor to ensure the issue is addressed and to identify any similar occurrences.

According to spokesman Richard Maher, the U.S. Postal Inspection Service has offered to help deal with the situation, and while Maher wouldn’t comment on the exact number of times this type of thing happens, he did claim that there are “relatively few” of these incidents.

John Fund, a journalist and co-author with Hans von Spakovsky of the book, “Who’s Counting: How Fraudsters and Bureaucrats Put Your Vote at Risk,” said someone could easily have voted with these ballots using a variety of fake signatures.

“It is doubtful they would have ever been detected,” Fund said.

A former FEC commissioner and counsel to the assistant attorney general for civil rights at the U.S. Justice Department, von Spakovsky said California is of particular concern because of the rising number of noncitizens illegally registering and voting in elections, as well as the “terrible shape” the voter registration rolls are in.

No matter what it was, it’s a serious problem, but one that President Obama and the Left doesn’t think is real. Unless of course the Russians are behind it, then it’s totally real and, well, Trump! Or whatever.