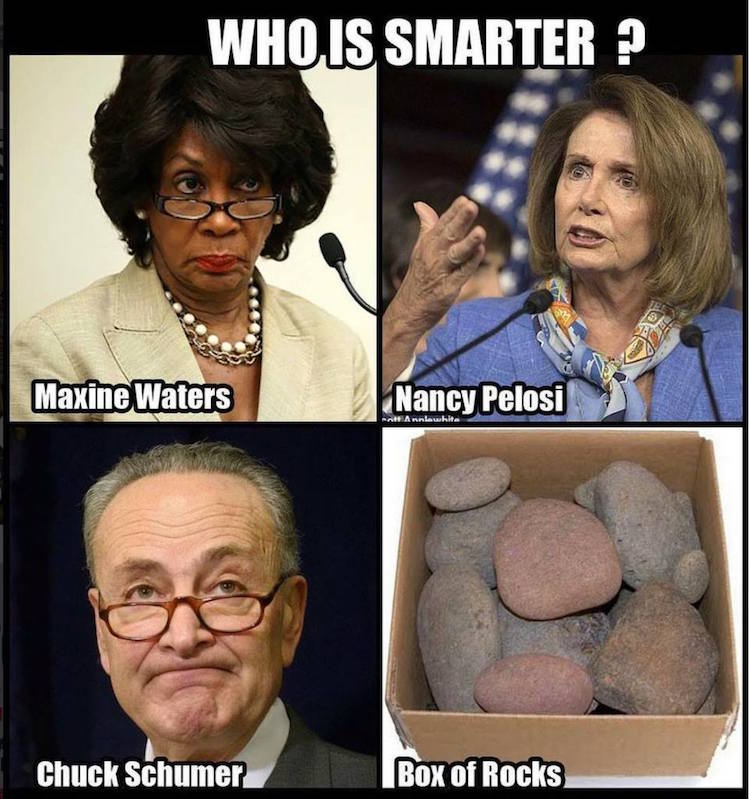 What a difference it makes when Republicans show some backbone.

Just days after surrendering on the Democrats’ brief government shutdown, Senate Democrat leaders have just made another concession to the GOP and President Donald Trump.

Politico reports that Minority Leader Chuck Schumer and Senate Dems have agreed to completely drop from budget negotiations their demands for a renewal of former President Barack Obama’s Deferred Action for Childhood Arrivals (DACA) — better known as his illegal executive amnesty for illegal immigrants brought into the country as minors.

Senate Majority Leader Mitch McConnell’s “procedural concession means we’ve got a deadline and a process,” Durbin added. “That to me is a significant step forward. It’s not everything I wanted, that’s for sure, but it’s a step forward.”

Politico notes that the news isn’t going over well with leftists in the House, who are still demanding that government operations for the American people be held hostage on behalf of the interests of unlawful residents (though Politico doesn’t phrase it quite that way, naturally). Osita Nwanevu at the left-wing Slate sums up the discontent of liberals unaccustomed to not getting their way:

If DACA really is dropped from budget negotiations, Democrats and Dreamers will be riding entirely on the idea that Mitch McConnell and Senate Republicans would be ashamed and embarrassed if they went back on their word. And, additionally, that House Republicans would take up a contentious immigration bill with no material incentive to do so.

These seem like questionable premises to House Democrats, who have balked at the news. “We are insisting that these things be in the same negotiation,” a Democratic aide told Politico. So, too, are liberal activists. “Heartbreaking that they’re doing this in the Senate,” Indivisible co-founder Ezra Levin tweeted. “Hope @NancyPelosi fights for Dreamers in the House.

Sorry fellas, but as a man you may be familiar with once said, “Elections have consequences […] I won.” That’s what happens when the American people aren’t with you and your opponents are actually willing to go to the mat for them.

At least, that’s what’s happened in the short term. But will the good guys’ resolve hold? There are new reasons for concern.

Last night, apparently feeling the need to play magnanimous dealmaker, Trump turned around and not only signaled that he’s may end up extending DACA anyway, but he also endorsed a pathway to citizenship for DACA recipients:

“We’re going to morph into it. It’s going to happen at some point in the future […] If they do a great job, I think it’s a nice thing to have the incentive of, after a period of years, being able to become a citizen” […]

At Conservative Review, Daniel Horowitz explains why if Trump really means this, he will imperil both his presidency and the country’s future:

On the next point, that he is open to a path to citizenship in 10-12 years, does anyone think for a minute that once amnesty is enacted, it will stay at a 12-year path? If there is this much political pressure among the elites (not the people) to legalize people who are 100 percent illegal, one can only imagine how much power they will accrue once they are 100 percent legal. It will be a cakewalk to “morph” the 12-year path into a truncated path, which will turn Florida and Arizona blue by the time Mike Pence seeks the presidency.

The good news is that Trump was spouting similar nonsense in that televised negotiation a few weeks ago, then proceeded to hold the line on the actual policy. The bad news is that we don’t truly know whether that pattern will hold this time around. Here’s hoping that Stephen Miller can keep him on the path he promised on the campaign trail — and here’s calling on the entire conservative grassroots to remind him of those promises. The events of the past week have reminded us that the Left can’t win — unless we let them.