By now most readers know that former top-tier candidate and California Senator Kamala Harris dropped out of the 2020 race for the Democratic Party nomination for President today.

She blamed a lack of money needed to continue. While this is likely true, what’s the real explanation for her lack of funding?

Here in one one cartoon is what we believe to be the answer: 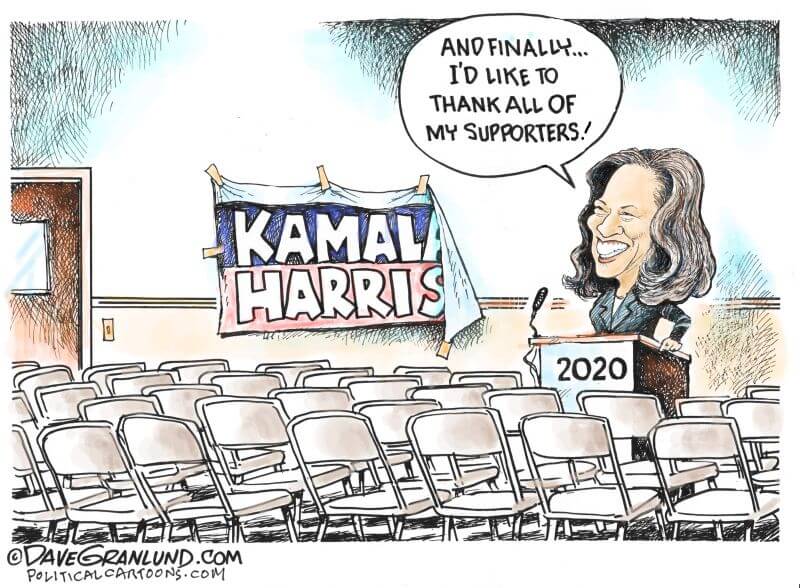 The real reason she had to quit is her support was extremely slim.

She had a real chance to win the nomination but blew it by hiding from her own record, because of her record, her inability to articulate coherent policy positions and her poor performances in the televised debates.

Here’s the background story, for those that missed it earlier:

The presidential campaign of California Democrat Sen. Kamala Harris is falling apart at the seams and it appears, at least to this observer, unable to be saved.

And in large part it is due to her consistently changing her stance on key issues and her staff being fragmented, The New York Times claims.

In early November, a few days after Senator Kamala Harris’s presidential campaign announced widespread layoffs and an intensified focus on Iowa, her senior aides gathered for a staff meeting at their Baltimore headquarters and pelted the campaign manager, Juan Rodriguez, with questions.

What exactly was Ms. Harris’s new strategy? How much money and manpower could they put into Iowa? What would the campaign’s presence be like in other early voting states?

Some Harris aides sitting at the table could barely suppress their fury about what they saw as the undoing of a once-promising campaign. Their feelings were reflected days later by Kelly Mehlenbacher, the state operations director, in a blistering resignation letter obtained by The Times.

“This is my third presidential campaign and I have never seen an organization treat its staff so poorly,”. Mehlenbacher said, taking a swipe at Rodriguez and Harris’ sister Maya.

“With less than 90 days until Iowa we still do not have a real plan to win” she said in her letter of resignation.

“There is no surer sign of distress for a campaign than the willingness of staff, donors and supporters to publicly-if anonymously- air their grievances while the campaign is still in progress,” David Axelrod, who helped bring former President Obama to victory, said.

“I have told her there needs to be a change,” Representative Marcia Fudge said of the California senator and her campaign.

“The weakness is at the top. She needs to take responsibility — that’s where the buck stops,” she said.

.@KamalaHarris woke up in Iowa today to PRE mortems In the @nytimes AND the @washingtonpost on her campaign.
Even as she spent Thanksgiving in the state that will kick off 2020 voting, the major national papers were concluding that her turkey was cooked. https://t.co/nYeN5vRIaY

Kamala Harris’s campaign is in tatters and running out of the cash needed to pay staffers, and some staffers told The Times people have been treated poorly.

If Harris is not able to gain a win in Iowa, New Hampshire or South Carolina it could mean the end of her once promising campaign.

Harris has had major issues including saying undocumented immigrants would be covered in her healthcare plan during a debate and then saying she did not comprehend the question the next day.

If one cannot run a presidential campaign it is unlikely they could run the nation. It appears that Harris’ dreams of being president are done.