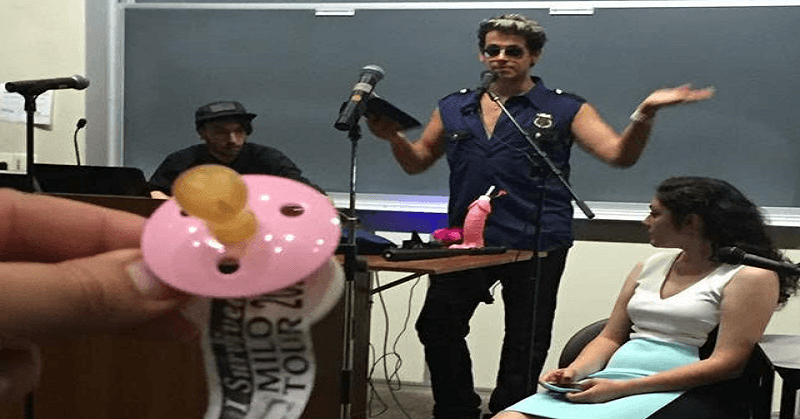 Yesterday, video surfaced of the Breitbart editor and bombastic “alt-Right” personality discussing the alleged positives of “relationships between younger boys and older men.” He has since tried to spin his remarks by drawing a ridiculous distinction between pedophilia (horrible) and pederasty (“enriching” and “life-affirming”). Yeesh…

That bit of damage control predictably didn’t impress the Conservative Political Action Conference, which rescinded its invitation for him to speak at CPAC 2017. But that’s nothing compared to the latest fallout.

Fox Business reports that Breitbart is currently weighing whether to fire Yiannopoulos:

Yiannopoulos, meanwhile, has portrayed himself as a defender of free speech who has been unfairly attacked by the politically-correct media establishment, a fight his supervisors seemed to relish. But now there is a fierce internal debate at Breitbart over whether he should remain with the website over his latest comments.

People inside Breitbart say that the decision on whether to keep Yiannopoulos will ultimately be a business one; senior executives there are weighing how “damaging his comments are to the Breitbart brand,” said one person with knowledge of the matter. Despite having strong web traffic on its website, many companies are skittish about advertising on Brietbart given its reputation as being the news outlet and opinion destination for the fringe nationalist group known as the “alt-right.”

“Breitbart already has advertising issues regarding its association with the Alt-Right, and this doesn’t help the business side,” said the person with direct knowledge of the debate inside Breitbart over Yiannopoulos’ future.

Further, an unidentified Breitbart editor allegedly told the Washingtonian that if the site keeps him, they could have a full-scale revolt on their hands:

“The fact of the matter is that there’s been so many things that have been objectionable about Milo over the last couple of years, quite frankly. This is something far more sinister,” the senior editor says. “If the company isn’t willing to act, there are at least half a dozen people who are willing to walk out over it.”

“Talking abut young boys and somehow seeking to ameliorate concerns over young boys’ relationships with older men…I’m pretty sure everyone in the company would vomit upon hearing these words,” the source continues. “What right-thinking person doesn’t feel sick to their stomach when hearing something like that?”

Milo’s fame has been on the rise over the past several months due to his provocative style, his support for Donald Trump being vindicated, and most recently conservatives rallying around him in response to leftist thought police setting UC Berkeley on fire rather than tolerate him speaking on campus.

But this is a good opportunity to remind ourselves of one of conservatism’s most important truths: principles define right and wrong, not personalities. Doing good in other instances or making the right enemies do not exempt anyone from objective scrutiny.

Actions have consequences, and it appears these are Milo’s.