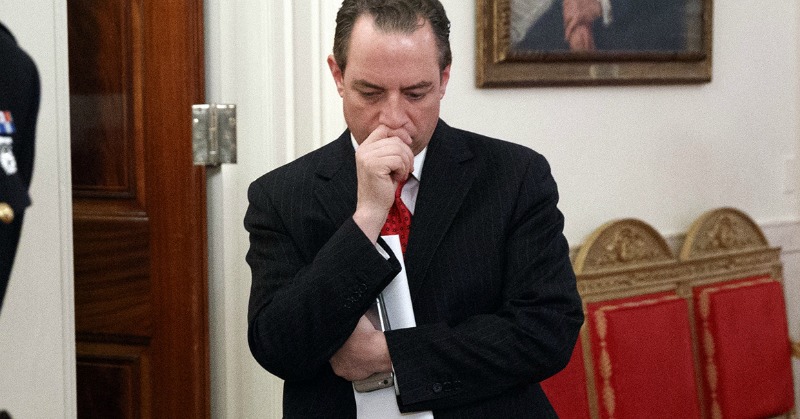 Almost two months into Donald Trump’s presidency, the White House has taken hit after hit from the media and fellow politicians, with Reince Priebus finding himself bearing the brunt of the criticism being aimed at administration officials.

He has been described as a “micro-manager” who inserts himself into every conversation possible, leaving many feelings as though he is trying to restrict access to President Trump. In interviews, Trump allies complained about his attempts to fill the White House with his political friends, effectively bringing the “swamp” right to the president’s front door.

It is also alleged that the morning briefings that could be used to set a schedule for the day and “counterbalance the president’s own unpredictability” are lacking direction and proper oversight.

One senior administration official, who spoke to Politico on the condition of anonymity, said that “[t]here’s a real frustration among many — including from the president — that things aren’t going as smoothly as one had hoped. Reince, fairly or not, is likely to take the blame and take the fault for that.”

Another noted the “lack of management” and “lack of strategy.”

Naturally, the White House rejected the idea the Priebus is becoming a scapegoat for the administration. They also said that he is greatly respected by the president and that no staff changes are expected to take place any time soon.

While the president may hold Reince in high regard, it would appear that those who have to work with him see him as overbearing and incompetent. I cannot independently verify the truth of this, but I would say some serious soul-searching needs to take place among White House officials.

They need to find a way to work together and efficiently lead the president to success. Trump is facing more than enough pressure from outside sources like the media, the last thing he needs are his own people failing to do their jobs.