As TFPP has covered, politicians in Philadelphia have been implementing the bright idea of taxing soda, which was supposed to be a no-brainer for raising revenue.

Well, at least they got the no-brain part right.

The Political Calculations blog has run the latest numbers, and finds that revenue is still failing to meet city officials’ optimistic projections:

For taxes assessed on sales from January 2017 through preliminary data for October 2017, total beverage tax collections in the city are running over 14% below the amount that city officials were counting upon to support their desired level of spending for a new “free” pre-K school programs, to cover a portion of the debt that the city will take on to make physical improvements to parks, libraries and recreation centers, and also to fund benefits for city employees.

Hey, here’s a crazy though: if you find you can’t pay for what you’re doing with the people’s money you already have, maybe you should try spending less money. Perish the thought, I know.

The closest that Philadelphia has come to hitting its desired level of monthly revenue was for the soda taxes assessed in September 2017 and collected in October 2017, which at $7,567,159, nearly came within $348,000 of the amount that might reasonably have been expected for the month if the city’s tax collections were coming in as city officials desired. Unfortunately, that month appears to be an anomaly, according to Philadelphia’s Deputy Revenue Commissioner Marisa Waxman:

“This is a new tax with a lot of seasonality and patterns that we’re still learning, so we’ve never had collections in October before,” she said. “There were some circumstances that contributed to this that we think might not repeat. There are other things in there that could repeat. We’ll just have to continue to monitor how this comes in month to month.”

Waxman’s comments can also be taken as a confirmation that Philadelphia’s soda tax collections are not coming in anywhere near as reliably as city officials expected.

You can find much more detail at the link, and you can check out the Political Calculations blog’s charts below: 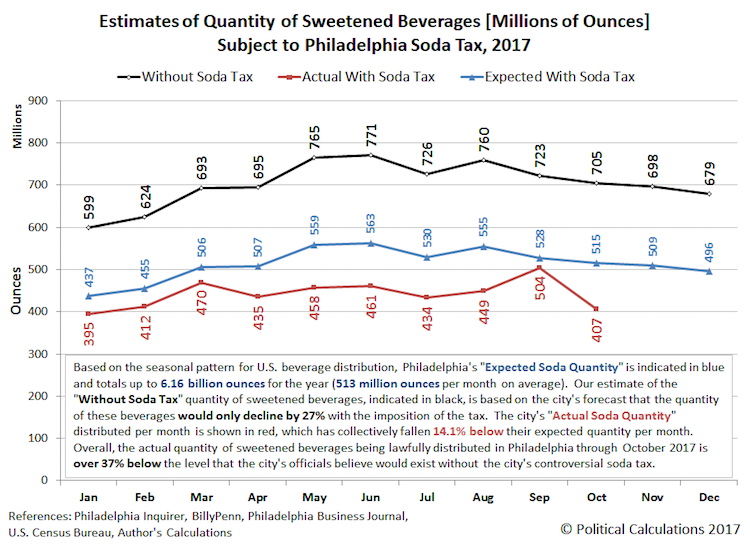 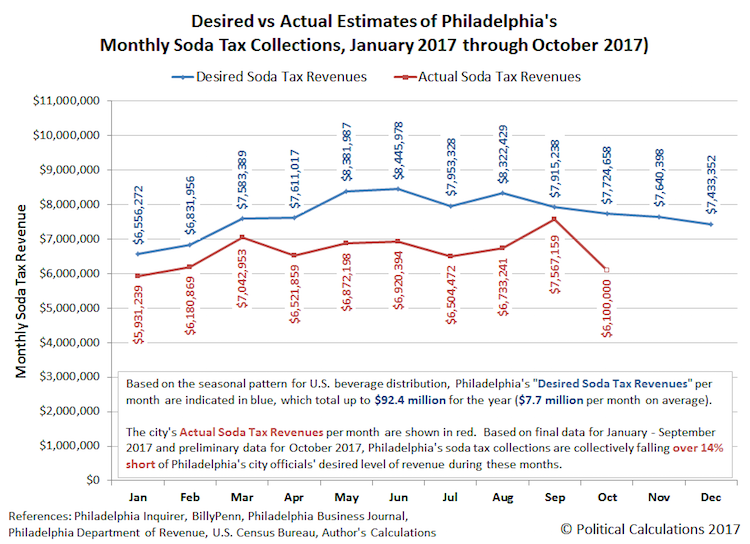 This is a classic example of how liberals refuse to accept even the most rudimentary concepts of economics, which is every bit as much a science as physics. They base tax schemes like this on the premise that they’ll get a cut of a certain level of economic activity, but never accept that by increasing the cost of that activity, they’re discouraging people from wanting to engage in it.

“But hey,” some liberals are surely thinking, “if we’re discouraging soda sales, at least that means people are drinking something healthier! Er, not exactly:

As a result of the 1.5-cent-per ounce tax on carbonated beverages, it turns out that beer is now cheaper than soda – and people are drinking more of it […]

“Purchases of beer are also now less expensive than nonalcoholic beverages subject to the tax in the city,” according to the study, written by Courtney Shupert and Scott Drenkard. “Empirical evidence from a 2012 journal article suggests that soda taxes can push consumers to alcohol, meaning it is likely the case that consumers are switching to alcoholic beverages as a result of the tax. The paper, aptly titled From Coke to Coors, further shows that switching from soda to beer increases total caloric intake, even as soda taxes are generally aimed at caloric reduction.”