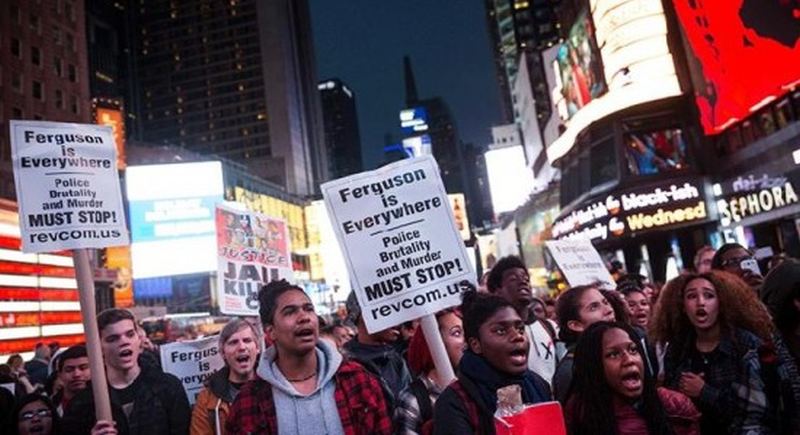 The signs that you see at all of the anti-police protests are being paid for in part by the “Revolutionary Communist Party.”

Via The Independent Sentinel:

If you were watching the news broadcasts about the protests in New York City, you undoubtedly saw many people carrying signs reflecting their beliefs. But wait. The people holding those signs don’t look even barely capable of having printed the signs themselves, so you might wonder who the sponsor of the rally could be. Who furnished the signs?

Well, on the bottom of the signs is the name of the sponsor: revcom.us

So, if you’re at all curious, just click right here on revcom.us and see who provided those spiffy signs those idiots are holding up. It’ll only take a second.

The idea is to foment a violent, communist revolution. They are well organized and well funded. You should ask yourself who is behind all this. Who’s organizing and paying for it? The communist enemies from within are and all these rioters and protesters are basically useful idiots doing the bidding of those with a much larger, more evil agenda. The overthrow of America – a coup from within. The Revolutionary Communist Party (RCP) is an anti-capitalism, Maoist communist party formed in 1975 within the United States. The RCP states that the only way for people to liberate themselves is through communist revolution. Check out this excerpt from Zombie and read it for yourselves:

…There’s countless videos where these fuckin’ pigs wantonly murder people right in front of a camera knowing they’re being recorded! What the fuck is it gonna take to get these muthafuckers to stop?! The answer is Revolution — Nothing Less! Nothing less than overthrowing the capitalist-imperialist system that they so viciously serve and protect…

Nothing less than a race war, the toppling of our government and the destruction of the Constitution will do for the communists. They are here and they are making their move.