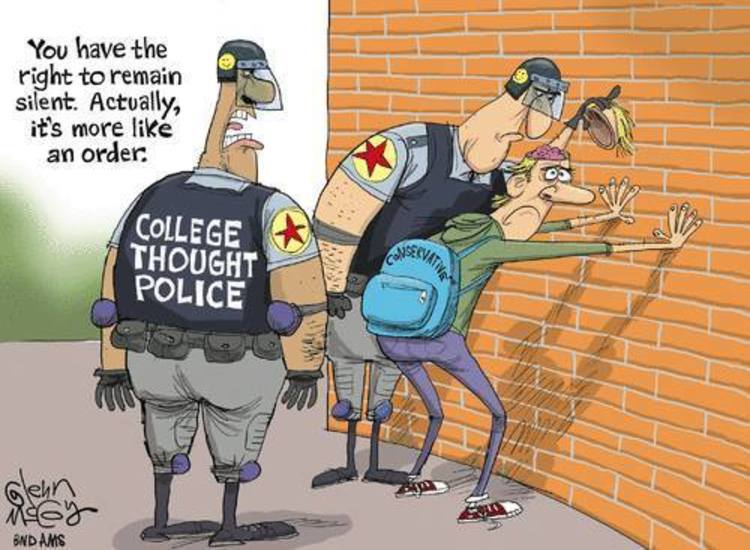 Robert Gehl reports that it’s hard to keep track of all the things that indelibly traumatize delicate students at the University of California Berkeley.

We know that Donald Trump traumatizes them – that’s a given, at this point. That’s why so often the mere mention of Donald Trump leads to violence. They can’t help it see? They’re merely reacting to violent speech with violent actions.

Ann Counter traumatizes them. That’s why the school cancelled her event – because these “traumatized” leftists are so hurt that they threatened to lash out and possibly harm her.

And with Ann Coulter, we know that free speech in general is traumatizing. Being forced to listen to other people’s opinions – especially ones you disagree with – is a traumatic experience. Best to call them “fascist” or “racist” or “queerphobic” and shut them down. With violence if necessary, of course.

Finally, the police are traumatizing.

Merely having a security presence on campus, a new student senator says, is traumatic to crystalline leftists and really has no place at the school.

“I do not think campus safety must rely on the police,” Juniperangelica Cordova-Goff said. “I think [UCPD] must be active in recognizing the trauma their presence alone brings to some students and work to limit visibility while remaining an open resource to those who choose to use it.”

This completes the circle of trauma. Speech is trauma and leads to violence. Police – sworn to protect everyone from the delicate social justice warriors to the most racist skinhead – step in and try to stop the violence.

The police cause trauma by doing their job.

It’s a never-ending circle of violence and trauma – just what they want.

Cordova-Goff makes no bones about her disdain for Free Speech, the police, white people, Donald Trump, Ann Counter and … well, what else do you got?

She writes that being a privileged student at UC Berkeley, one of the most elite colleges in the country – makes her feel unsafe. “Living on the streets for six years did not prepare me for the violence of UC Berkeley, she writes, apparently seriously.

But then what of the police? What of this campus security that is also traumatizing. Who will protect the safety and security of the students who are subject to the suffocating violence of an elite college experience?

Nobody. For Cordova-Goff is not interested in safety and security. Not really.

Telling us that she both feels unsafe and victimized on campus while saying she doesn’t want law enforcement there to protect her tells us all we need to know.

Almost – it almost tells us all we need to know. The rest is summed up with one of her final comments in a column in the student newspaper … something right out of RevCom propaganda:

And as long as the University of California refuses to fully dedicate itself to the liberation of the oppressed students on their diversity brochures, I will not rest, will not be silenced, will not put down my lighter fuel.

And without any police, that lighter fuel, no doubt, would be used by Ms. Cordova-Goff to burn the institution to the ground.

And she’s going to take you all with her.