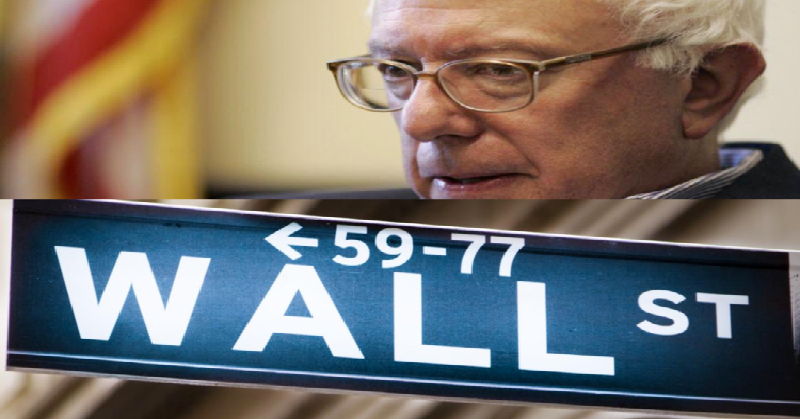 When Bill Clinton jokes that Bernie Sanders fans would like to see every third person on Wall Street shot, he may as well be serious.

Sanders has been blasting Wall Street for years. To his fans, the financial district embodies everything wrong with capitalism today. On Sunday during a CNN appearance, Sanders questioned whether or not Wall Street is necessary to grow the economy. “How are we going to create wealth without Wall Street?…I think we can,” Sanders stated, without specifying how or why.

Sanders was recently caught off guard during a New York Daily News interview where he appeared clueless about even his own proposals. When questioned on how he would actually break up the big banks, Sanders couldn’t seem to walk them through the logistics of it. He at least gave the impression of being informed this time around.

“I think you can break up these large financial institutions,” Sanders said.

It’s a big change for Sanders. Only a few weeks ago Sanders seemed confused about the Dodd–Frank Wall Street Reform and Consumer Protection Act, the major financial reform law that went into effect in the summer of 2010.

In an April 1 interview with the New York Daily News, Sanders said “I don’t know” when pressed about details of the regulations that big banks face right now. His critics pounced.

“I look at it this way — the core of his campaign has been break up the banks, and it didn’t seem in his answers he understood how that would work under Dodd-Frank,” Clinton said recently.

Section 121 of Dodd-Frank gives the Federal Reserve power to determine that a big bank poses “a grave threat to the financial stability of the United States.” The Fed can take a number of actions to get a bank back on track, including breaking it up (the actual language is the law says the Fed can require a bank to “sell or otherwise transfer assets”).

Well, he’s fooled CNN. Apparently citing a law while still giving no actual specifics on how breaking up the banks would work logistically, or taking into account any of the consequences of such a breakup, is enough to convince CNN that it’s a sound policy.