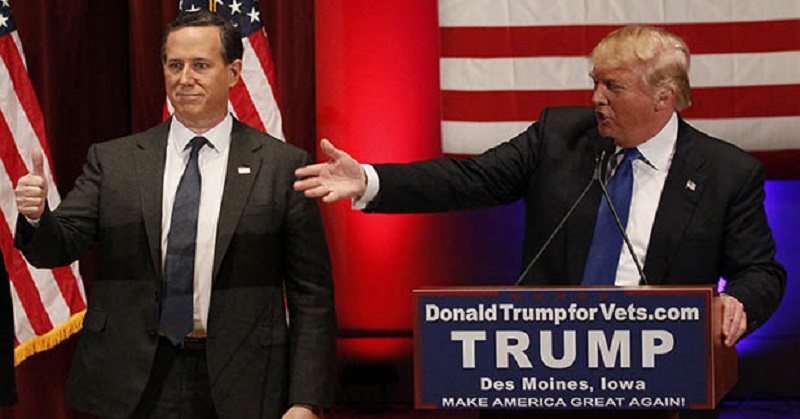 The 2016 presidential race has definitely brought out the true colors of many within the ranks of GOP leadership.

Many Republicans have made it clear they’d rather root for the other team than support their party’s presumptive nominee Donald Trump.

Senate Majority Leader Mitch McConnell refuses to say last whether or not he thinks Donald Trump is qualified to be president.

Nonetheless, he praised presumptive Democratic presidential candidate Hillary Clinton Wednesday and claimed she is “intelligent and capable” as he casted Trump as not yet credible.

Unlike McConnell and the other insider elitists, former Republican presidential contender Rick Santorum is embracing the people’s choice.

“Well, I do. I mean, I’ve had the opportunity to spend some time with Donald Trump,” Santorum, Trump’s former primary rival, said.

“As you can imagine, I mean, he’s a very engaging man. He’s — he puts on an image as a lot of candidates and I think all of us do when we’re in front of a microphone that’s really tough and combative.”

“He knows how to put the deal together. And I think he’d be a — he’ll be a very constructive figure in the White House.”

Republicans like McConnell, who disregarded the voters and gave Obama and the Democrats everything they wanted and more as soon as they were elected, truly believe that 4-8 years of Hillary is better than 4-8 years of Trump. Instead, rallying behind him our candidate, they jump on the politically correct, anti-Trump bandwagon.