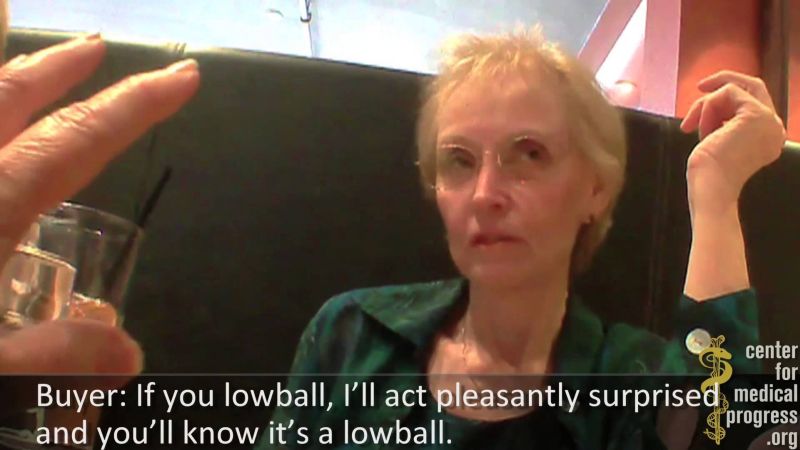 After video emerged last week of a top executive at Planned Parenthood appearing to negotiate the sale of aborted baby body parts, the political darling of the left went into immediate damage control.

Planned Parenthood denied that they make any profit off of selling baby body parts, which is a federal crime. They insisted that any compensation they receive for “donated” body parts is solely related to recouping basic expenses associated with “the transportation, implantation, processing, preservation, quality control, or storage of human fetal tissue.”

Federal law allows for body parts to be donated and for basic expenses to be recouped.

But now, with the release of this latest undercover video, that narrative has completely disintegrated. The video reveals, without question, that the official statements of Planned Parenthood are contrary to their common business operations.

In the second video released today by the Center for Medical Progress, yet another senior medical adviser to Planned Parenthood of America appears to negotiate the price of selling baby body parts to actors playing entrepreneurs from a start-up biotech firm.

Dr. Mary Gatter, President of Planned Parenthood’s Medical Director’s Council, is asked, “What would you expect for intact tissue?”

Gatter starts to haggle immediately, “Why don’t you start by telling me what you’re used to paying?”

When pushed for a number, Gatter says, “Well, you know in negotiations the person who throws out the figure first is at a loss, right? So…”

When pushed again for how much her Planned Parenthood affiliate is willing to sell baby body parts for, she responds, “Okay, $75.”

When the buyer tells her that number seems low Gatter responds, “I was going to say $50.”

Then the buy[er] offers her $100 to which Gatter quickly responds, “Okay.”

In this second video, shot in February at a restaurant in Pasadena, Gatter seems willing to accept a higher and higher price.

What’s more, in the beginning of the video, she talks about an earlier situation where a company called Novogenix used to come to her abortion clinic to buy specimens: “Heather, a Novogenix person would come to the site and our staff would sign the patients up and get consent. And then Heather would look at the tissue and take what she required. So logistically it was very easy for us. We didn’t have to do anything.” (emphasis added)

This statement would seem to contradict the need of a higher and higher price for doing nothing except letting a technician from another company come into the facility and take specimens. While she seems willing to accept higher prices, Gatter does claim Planned Parenthood is “not in it for the money” and they do not want to appear to be selling body parts.

At the end of the video, like Nucatola, Gatter talks about changing the abortion technique to get intact specimens, changing from a rather violent suction method that would destroy tissue to what she calls an IPAS, which is a reference to a nonprofit company that makes and distributes “manual vacuum aspirators” which would be a less harmful way to get at the internal organs. She said there would be protocol issues with the patient but that she saw no problem with it.

She calls it a “less crunchy” way to get intact organs.

At the end of the tape provided by CMP, Gatter jokes about wanting “a Lamborghini” for body parts. …