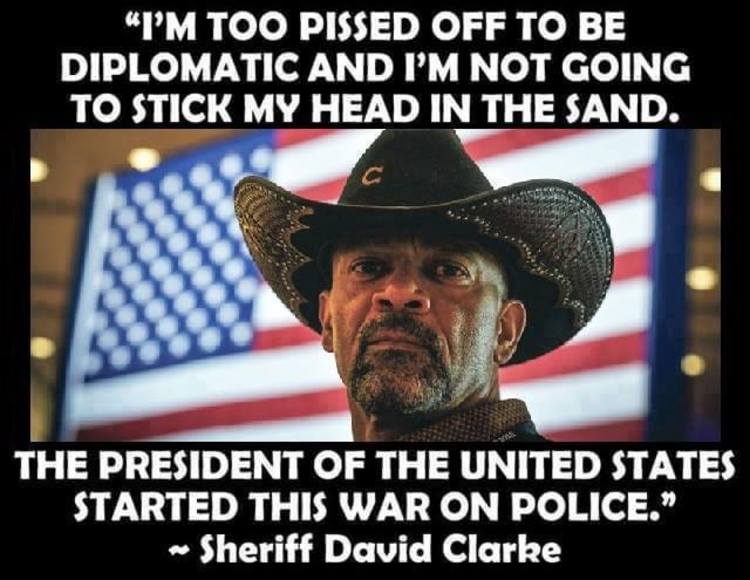 County Sherriff David A. Clarke Jr. criticized the idea that President Barack Obama’s call for reforming the police is helping law enforcement and is instead weakening “the institution of policing,” adding that the solution is to “fix the ghetto” and stop trying to “fix the police.”

Sheriff Clarke made his remarks during an interview with Fox & Friends host Brian Kilmeade on Monday, who launched the discussion by talking about the execution-style killing of a deputy sheriff in Texas last Friday; the suspected killer, a 30-year-old black male, was arrested and charged with “capital murder” in that crime on Saturday.

When asked for his reaction, Sheriff Clarke said the headline should be “Black Man Shoots White Defenseless Police Officer” because, he continued, “I get sick and tired when it’s the other way around, when an officer defends his life, they always point out that it’s a white officer shooting an unarmed black suspect.”

“Look, President Obama has breathed life into this ugly movement,” said Clarke. “And it is time now for good, law-abiding Americans to rise up, like they did in Houston around that Chevron station [where the deputy sheriff was murdered], an outpouring.”

“But it just can’t be symbolic,” said the sheriff. “We now have to counter this slime, this filth coming out of these cop-haters.”

“If there’s anything that needs to be straightened out in this country, it is the subculture that has risen out of the underclass in the American Ghetto,” said Clarke.