As the vast majority of people know by now wanna-be dictator Joe Biden has announced that any employer with more than 100 employees will be required to mandate covid vaccinations or weekly testing.

That has not set well with many people in this country and now one elected “pro-freedom” Sheriff has had enough and is putting his foot down.

Cleburne County, Arkansas Sheriff Chris Brown is refusing to go along with Biden’s unconstitutional demands and has published an open letter stating his intentions and why he won’t comply.

“Since March of 2020, we have seen much controversy over COVID, mandates, restrictions, lockdowns, vaccines, and a number of other things. We have watched as this topic has divided families, friends, and coworkers. We have seen an unprecedented amount of division, hate, and contention among Americans. With the rollout of the COVID vaccines, that division has become more and more widened, and the vitriol more intense between those who believe in the vaccines, those who don’t, and those who are undecided.

As law enforcement officers, our first duty and what we swear an oath to, is to support the Constitution of the United States, and the Constitution of the State of Arkansas. It is in that defense and the defense of individual liberty that the Cleburne County Sheriff’s Office has not, and will not mandate the COVID vaccine for any of our employees. Just like with the flu shot, their choice to get vaccinated or not is theirs and theirs alone, and we respect their decisions.

I am not pro-vaccine, and I am not anti-vaccine. I am pro-freedom, and I am for each person’s ability and responsibility to decide for themselves (in conjunction with their doctor) whether or not to get the vaccine.

I am appalled at some of the absolute dictator-like things we are seeing from the Federal Government, and several of the State Governments. It is absolute tyranny, and completely abhorrent. It flies in the face of everything our country has always stood for, and is only furthering the damage and division done to the people of this wonderful nation.

CS Lewis said this: “Of all tyrannies, a tyranny sincerely exercised for the good of its victims may be the most oppressive. It would be better to live under robber barons than under omnipotent moral busybodies. The robber baron’s cruelty may sometimes sleep, his cupidity may at some point be satiated; but those who torment us for our own good will torment us without end for they do so with the approval of their own conscience.”

It’s time for our politicians and other public servants to stand up and remember that their first responsibility is to protect people’s rights, not to run their lives. 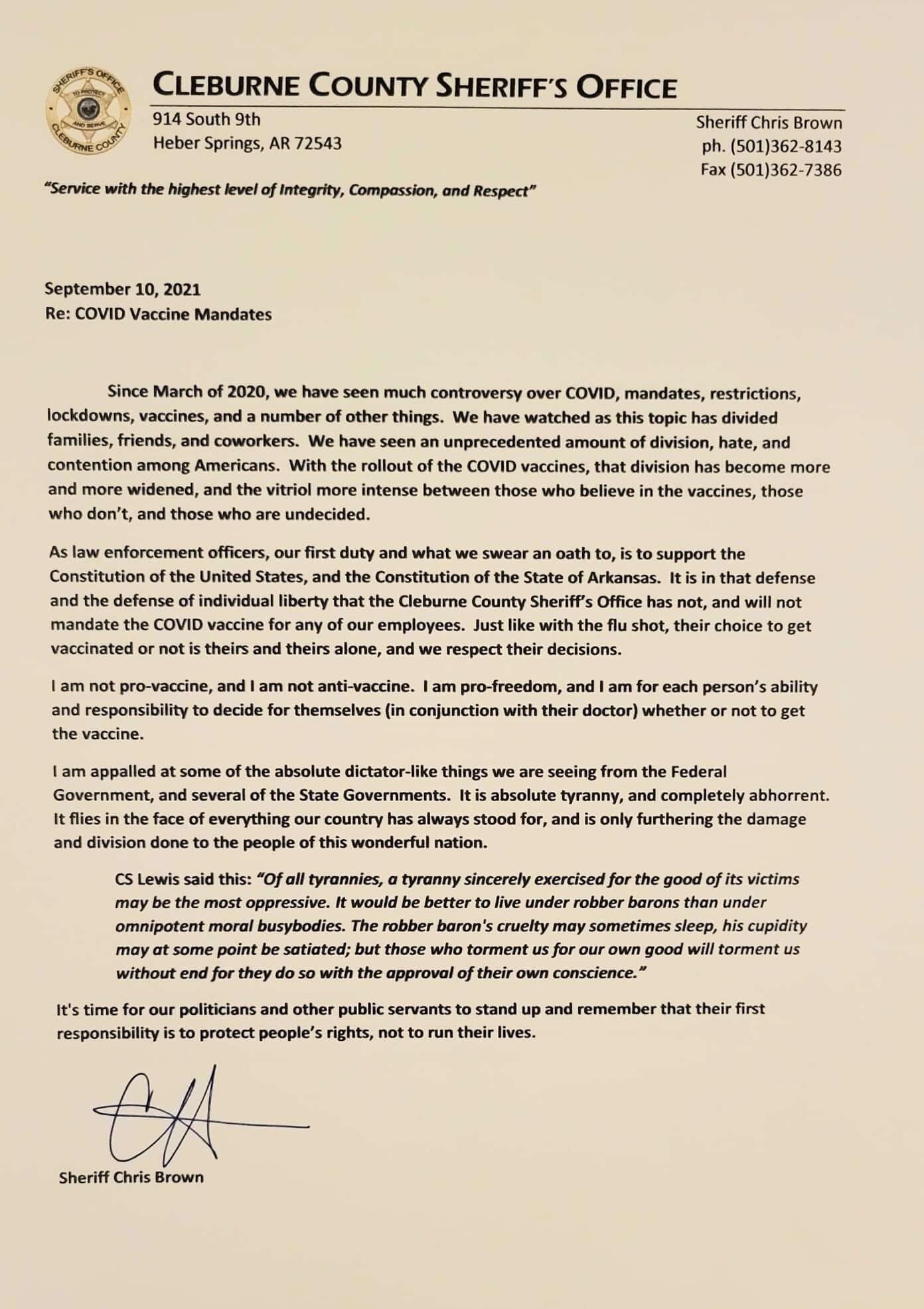 One can easily tell from Sheriff Brown’s letter that he really is a pro-freedom sheriff and we applaud his decision to make a stand.

We hope that every sheriff in America will take the same position. At this point only mass civil disobedience and refusal to comply with unconstitutional dictates can save this country.