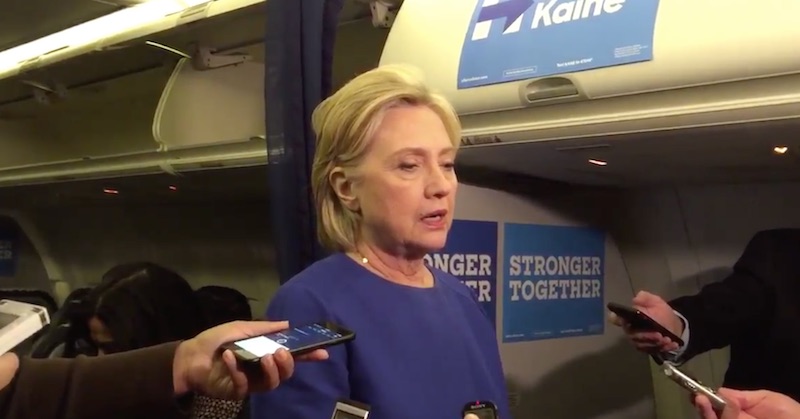 Two very … interesting things happened aboard Hillary’s plane Saturday night after an explosion rocked New York City, and neither of them are very good for the Democratic nominee.

The first came when Hillary went back to talk to the press about the bombings (which is what they were and what Hillary called them, but more on that in a minute).

Take a look and judge for yourself:

Hillary Clinton, on her campaign plane, responds to explosion in NYC pic.twitter.com/4tfyUE2vNc

Hillary is so drugged in her presser she would be arrested if she were the pilot. Sobriety test please. #ZombieHillary

The second interesting thing that happened was the way the press attacked Donald Trump for calling the explosion a bomb (it was) when at the time, everyone seemed to be calling it an “explosion.”

“Trump made the statement before local officials had publicly confirmed details of the incident or what caused the explosion,” CNN breathlessly exclaimed. “Typically, national political figures use caution when describing unfolding situations and law enforcement actions.”

Now, normally this would be in the “Who give a crap” category if it weren’t for this: Hillary Clinton called it a bombing too.

Not only that – seconds after she called it a bombing, a reporter asked her if it was appropriate for Donald Trump to call it a “bomb.” Seriously. That happened. Listen to the start of her statement again:

Hillary Clinton, on her campaign plane, responds to explosion in NYC pic.twitter.com/4tfyUE2vNc

“I’ve been briefed about the bombings in New York and New Jersey,” she began by saying.

Not 20 seconds later, a reporter asked: “Secretary Clinton, do you have any reaction to the fact that Donald Trump … called the explosion in New York a bomb?”

Wait … what? Saying a “bombing” is fine, but saying it was a “bomb” is wrong? Idiotic.

When CNN ran a clip of Hillary’s comment on Twitter, they left out the first part – where she calls it a “bombing.”

Hillary Clinton comments on blast in NY: "We should withhold judgment until we know more." https://t.co/FYN0p4uj27 https://t.co/I0q6aU7KmL

Hillary’s got some protection racket going with the media, doesn’t she?