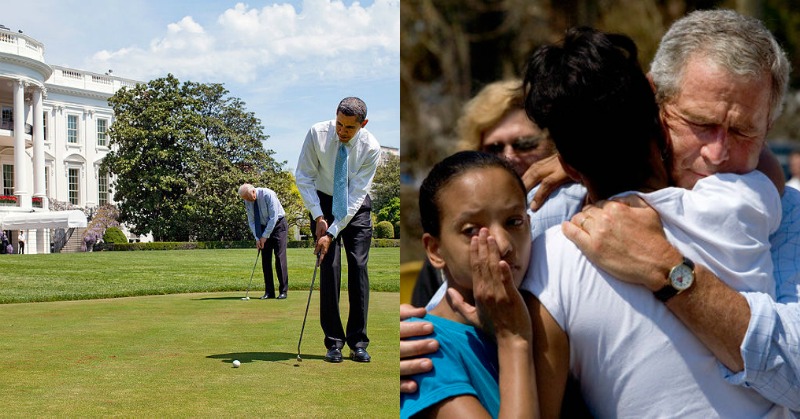 Much can be said about the legacy of President George W. Bush, both good and bad. However, this video sums up the major difference between his presidency and that of President Barack Obama.

As the video shows and as many of us likely remember, Bush went down to Louisiana and comforted those that were hurting. Regardless of what anyone may think about Bush’s policies, that kind of compassion is difficult to fake.

Bush held people in pain and tried to comfort them. His presence there mattered — it showed that even the president was there to help and wasn’t sitting on his hands in Washington.

Flash forward to 2016 and what did President Barack Obama do? Well he did what he does best, golf.

The Washington Times reported that the flooding in Louisiana is the worst natural disaster since Superstorm Sandy. The flooding has taken eleven lives and damaged more than 40,000 homes.

In between golfing and vacationing in Martha’s Vineyard, Massachusetts, Obama did speak with Federal Emergency Management Agency Administrator Craig Fugate on Wednesday, who the White House says “briefed the president on the resources that have been provided to support the response and recovery.”

According to the Times, Obama told FEMA to utilize “all resources available” to aid Louisiana, but didn’t feel it was important enough to change his vacation schedule.

His vacation began Aug. 6 and will last until Sunday. On Wednesday, instead of cutting his vacation short, he decided another round of golf was appropriate — after he has already played eight rounds since his vacation started.

Instead of Obama, the White House said that Department of Homeland Security Secretary Jeh Johnson will go down to Louisiana and assess the government response to the disaster.

A White House spokeswoman said Mr. Obama has received a series of updates on the flooding while on vacation, and spoke earlier in the week to Louisiana Gov. John Bel Edwards, when he approved a major-disaster declaration for affected parishes.

As you can see on the video, Kanye West famously claimed that Bush “doesn’t care about black people,” because of West’s and other liberals’ massive ignorance about how the federal government works.

Given the two very different responses by Obama and Bush and the resulting backlash Bush faced, it appears that of the two men, Obama is the one that doesn’t care about the people of Louisiana (since it isn’t just black people that were affected in either disaster). Apparently he sees his golf game as more important than going down to Louisiana to do his job.