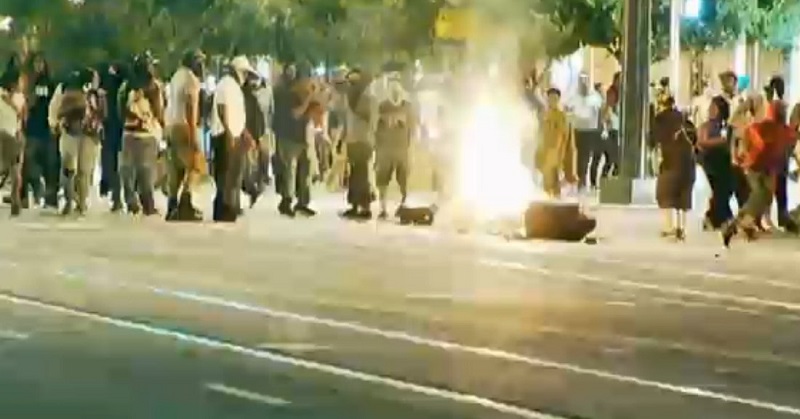 Rioters in Charlotte in their second night in a row rampaging the city tried to throw a photographer into a bonfire they started in the middle of the street.

Local station WCCB reported in a tweet Wednesday night that its reporters witnessed “protesters” trying to burn the photographer alive.

The statement was repeated by Marvin Beach, a reporter for WCCB on their live stream. Beach said the station’s photographer witnessed the attack.

As The Daily Caller reports, it’s unclear exactly why they tried to throw the photographer on the fire, or why it failed, but the livestream apparently later captured police providing assistance to the unnamed photographer, indicated he was unharmed.

The photographer was apparently white, raising the specter that he was targeted because of his race – There have been many cases of race-oriented violence during the two-day chaos.

A state of emergency has been declared by North Carolina Gov. Pat McCrory, sending in at least 1,000 National Guard troops to quell the violence.

The riots were triggered by the shooting death of Keith Lamont Scott, a black man, by a black police officer. Scott’s family and their attorneys assert Scott was unarmed, but reportedly, there is dashcam video showing Scott coming at the officer with a gun.

The second night of violence Wednesday night was even more chaotic than the first, with at least one protester killed by another protester, and several police injured by flying objects.

By Thursday morning, things had turned calm, but the area was still a crime scene. The man who was shot is in critical condition, and at least four officers were injured.