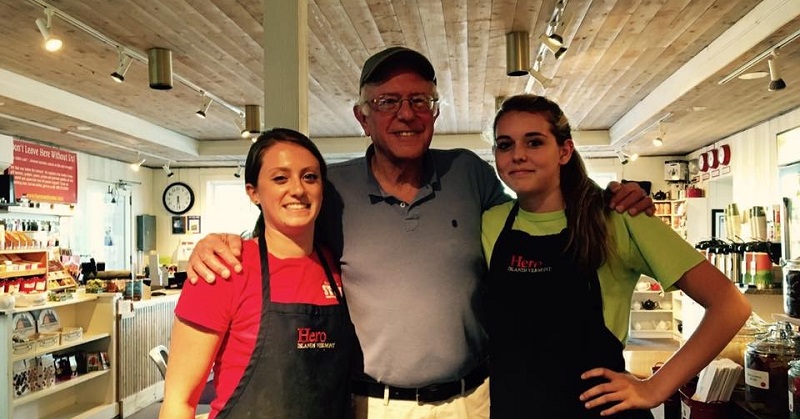 Socialism has been very, very good to Bernie Sanders.

Remember, the man never really worked a day in his life until he was 40. When he was working, he was bad at it. One friend called him a “shitty carpenter.”

So it’s interesting that the United State Senator who is proud to fly “coach” just plopped down $600,000 for a snazzy new summer home … right after dropping out of the presidential campaign.

The site Seven Days reports that Sanders has purchased a home on the Champlain Islands.

Bernie’s new digs have four bedrooms and 500 feet of beachfront property along Lake Champlain. He will reportedly keep his home in Burlington and use this as his summer home.

“We’ve traveled up to the islands many times over the years — almost always on day trips,” Sanders’ wife, Jane O’Meara Sanders, told Seven Days in a written statement. “We’ve been impressed with the North Hero community, eaten at the North Hero House and Shore Acres and have suggested them to friends who were looking for a beautiful place to stay or have dinner. St. Anne’s Shrine in Isle La Motte is my favorite church and it is nearby.”

In the above photo, Bernie even posed with the folks from the local general store. They now serve a sandwich called the “Feel the Bern,” in the socialist Senator’s honor. It consists of a homemade roll, sliced turkey, fresh apple chutney, hot pepper relish, lettuce, tomato and provolone cheese.

“It’s not fair that the Billionaire Class controls 99 percent of the bread,” the menu description reads. “Here’s a sandwich for the rest of us … to keep us nourished until everything cool is free!”

Sanders ordered the sandwich during his visit last week, Hero’s Welcome owner, Robert Camp, told Seven Days. The store once offered a Sanders sandwich that poked fun at the senator, Camp said, but later pulled it. The new version captures the essence of his rise to national prominence, Camp said.

The popular general store has a line of chairs out front — one side labeled “Republicans,” the other “Democrats.” In the middle, until recently, sat alone “Sandernistas” chair, Camp said. That chair will be back — as long as the new neighbor doesn’t mind, Camp joked.

Isn’t that cute? It’s not like Bernie is turning his back on his supporters in favor of expensive new digs.

Where do you think he got that money from? His net worth is less that the total cost of this new house.

It couldn’t be that he managed to get some money from the DNC for dropping out and endorsing Hillary, could it?