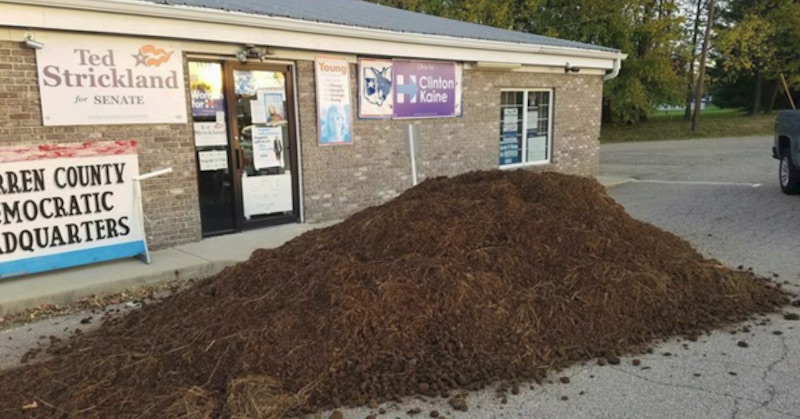 Someone made a return delivery to the Warren County Democratic party in Ohio this weekend –  giving back something they’ve been serving to the community for years.

Whether it’s horse or cow manure, someone backed up a truckload of what appears to be a big pile of crap and dumped it at the front door of the local Democratic party offices.

Warren County Sheriff’s deputies responded to the call of “criminal damage” to the building in Lebanon, Ohio and reported seeing tons of the stinky stuff right in front of their offices, WLWT is reporting.

Bethe Goldenfield, chairperson with the Warren County Democratic Party, said that security cameras show that at 12:03 a.m., a truckload of manure was dropped at the front door of their building and that they’re working with local officials to identify who was behind it, saying “This is not going to deter or intimidate us, and will in fact motivate us even more.”

Goldenfield said the big pile of crap will not intimidate them and will only make them work harder for Hillary Clinton. But first, they have a huge mess to clean up.

The same thing happened in 2012, but this time they installed security cameras and are hoping they can identify the culprit.

The party issued a plea for volunteers to help get voters to the polls on its Facebook page, which also posted a photo and warning: “We have cameras, so the perps will hopefully be responsible for their actions.”

Of course, dropping manure in the parking lot of the party headquarters pales in comparison to the firebombing and other violent acts that Democrats have committed against GOP headquarters around the country, recently. In Orange County, North Carolina, the building was set on blaze and in Indiana, earlier this month, someone tossed a brick through the Indiana Republican Party offices.

Police do not have any suspects yet, but they probably will after reviewing the video camera footage.

'It's a Dumb Idea': Trucking Industry Reportedly Has No Confidence in Joe Biden's Shipping Crisis Plan