When it comes to prosecutions, it doesn’t get much more political.

St. Louis Circuit Attorney Kim Gardner, the prosecutor who decided to bring weapons charges against a couple who made national news last month for displaying weapons to deter a mob of Black Lives Matter “protesters” trespassing on private property, is using her decision to raise money to benefit her own re-election campaign.

And the attorney for the couple wants her thrown off the case for it.

According to KMOV-TV in St. Louis, attorney Joel Schwartz, representing Mark McCloskey and his wife, Patricia, asked a court Wednesday to disqualify Gardner.

The filing charges that “Ms. Gardner’s decision may have been affected by her personal, political, financial, and professional interests, and that her neutrality, judgment, and ability to administer the law in an objective manner may have been compromised.”

That’s what a “reasonable person” would conclude, Schwartz wrote in the court filing. And he used some of the Democratic prosecutor’s own campaign fundraising materials to back it up.

“In the last 24 hours, there has been a lot of national attention surrounding Kim’s decision to press charges against a couple that brandished guns at a peaceful Black Lives Matter protest,” a July 22 email from VoteKimGardner.com stated.

The email claimed Gardner had received death threats and noted that Missouri Republican Gov. Mike Parson has said he would pardon the couple if they were convicted.

It reminded readers that Republican Missouri Sen. Josh Hawley, as KMOV has reported, had demanded an investigation of Gardner’s handling of the case.

And, naturally, it brought in President Donald Trump and his support for the McCloskeys. (The couple appeared at a July 17 virtual campaign event for the president, as CBS News reported.)

Then it got down to the serious business of collecting money.

“Right now, Kim’s re-election is only weeks away. We need to do everything in our power to re-elect Kim for St. Louis District Attorney to send a message to Washington DC that the people of St. Louis gives [sic] her their full support. 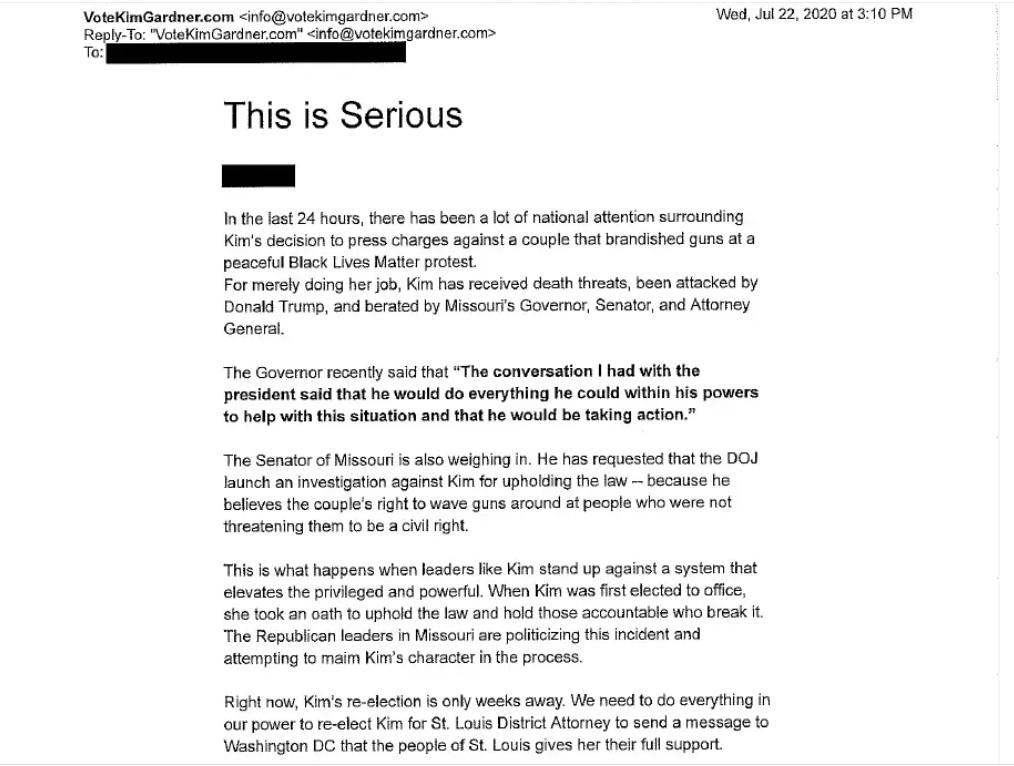 The “or whatever you can give” line (not pictured) is perfect. Gardner’s people don’t want much in return for their candidate’s willful distortion of the justice system — just whatever the public can afford.

And a distortion of the justice system is exactly what the country is witnessing in real time in St. Louis.

On June 28, the McCloskeys were faced with a mob of strangers who had broken into a private road (apparently en route to the city’s mayor’s home. They decided to protect their property by showing the mob they were armed and willing to defend themselves.

A couple pointed guns at protesters in St. Louis as a group marched toward the mayor’s home to demand her resignation. https://t.co/5EqDd43QCd pic.twitter.com/KWNaif77ch

They were greeted with howls of insults and threats, the McCloskeys say, but the important thing is no one got hurt, not the protesters and not the McCloskeys.

It’s not hard to guess that the presence of armed homeowners was more than a small deterrent to anyone in the mob who might have been inclined to start pulling a Portland, Oregon-style riot in the McCloskeys’ Portland Place development.

And for that, Gardner, the St. Louis circuit attorney whose 2016 campaign is on record as having been funded by a political action committee connected to liberal financier George Soros, decided to bring felony charges of unlawful use of a weapon.

That in itself is insulting on its face. But for Gardner to use her patently political prosecution to raise money for her own re-election is even worse.

And many Americans noticed:

Kim Gardner is so corrupt. She should be protecting her law abiding citizens! How do these people get elected??? How? What is happening to America when the criminals and anarchists can get away with anything, and we can’t protect our homes and ourselves??? Insane

Any thought this is about justice is sadly https://t.co/W0Pg8HF8Mt is raw politics nothing more. The state AG should stop this madness.

What a disgrace. Another Soros funded hack. She should be disbarred and arrested.

Weaponizing the justice system against innocent American citizens. DISBAR her

That last one makes an excellent point.

Prosecutors like Gardner who selectively target awesome power of their office based on factors other than the administration of justice aren’t simply derelict in their duties, they’re actually using their powers as weapons against the people they’re supposed to protect.

And more and more attention is being paid to prosecutors like Gardner, who’ve received financial support from Soros or related entities — all aimed at infecting the nation’s court system with a virulent strain of leftism that has struck from San Francisco to St. Louis, to Chicago to Philadelphia. (That’s an observation Chicago Tribune columnist John Kass earned the ire of his newspaper’s union for making.)

Politics should never be a factor, but clearly, in this case, it is.

And when Gardner’s campaign actually used her weaponization of the justice system as a reason liberals should donate to her cause, she proved how thoroughly liberals have succeeded in politicizing parts of the country’s court system.

Whatever happens to Schwartz’s petition to get Gardner disqualified from the McCloskey case, she’s already proven herself to unworthy of the office.

Beyond a shadow of a doubt.