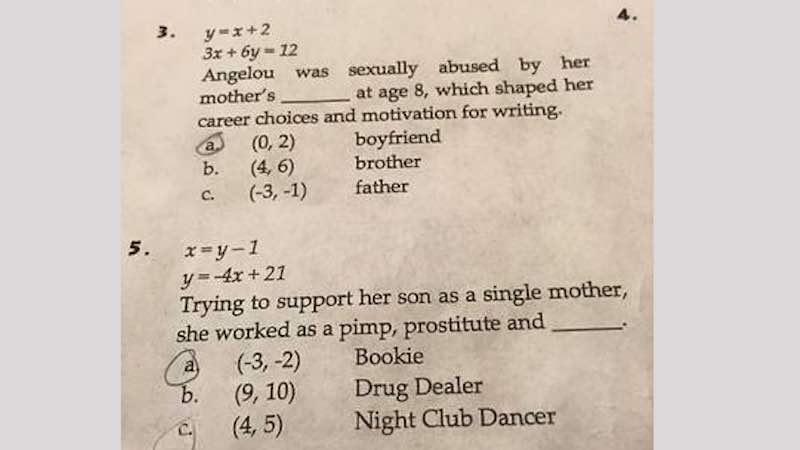 Eighth-grade students in southwest Florida were asked about prostitutes, pimps and sex abuse on a take-home math test.

They were word problems on an algebra test at Lexington Middle School – and parents are outraged.

One of the questions said, “Trying to support her son as a single mother, she (Angelou) worked as a pimp, prostitute, and ______.“

Parents said their students are not even studying Angelou.

The school district issued an apology to the parents and students said it would not happen again. The worksheet came from an external teacher resource website, which is a common tool used by the district, however, it was not vetted carefully by the teacher.

As for the co-mingling of math and language arts, the district said this has been done for years to help with reading comprehension.

One mother told Fox4Now that she was shocked when she saw the homework. “I read it and just thought, ‘what in the world?’ this is so inappropriate for a 13 year-old 8th grader.”

A school spokeswoman said the teacher got the homework from an “external teacher resource site.”

“The worksheet in question was utilized by Algebra I Honors classes and was chosen by a veteran teacher for its alignment with Florida Standards. While Maya Angelou is a well-known American Author and the facts of the worksheet are historically accurate, the Principal believes they were inappropriate for some students.  She has delivered a ParentLink message to 91 homes “sincerely apologizing” for the use of the material and met with the teachers that utilized the worksheet.”

The district also says the principal met with teachers and encourages any parents involved who may have any questions to call the school.