Do you know how the Democratic party earned their symbol? The donkey?

The story goes that Andrew Jackson’s political enemies called him a “jackass”. This was intended to be an insult–a combination of Jackson and donkey.

However, the joke somewhat backfired as Democrats incorporated this symbol as part of their political message. Indeed! We are donkeys! We are work horses for the people! We are helpful–an important resource–for all!

Despite their deeply-entrenched racist past, Democrats have been able to white wash decades of history to appear as the party of the people–and all the people!

African Americans, blue-collar workers, women, immigrants, the Democrats claim them all. Let’s focus on this last one, shall we?

Are Democrats really supportive of immigrants because they are workhorses for the people? Or, do they prey upon these individuals (Tammany-hall style) and scoop up their vote?

According to one source, foreign-born voters historically vote Democratic. We can see a pattern emerge over the long term:

The following graph shows the electoral behavior of foreign-born voters–mostly voting legally–in US presidential elections since 1992*: 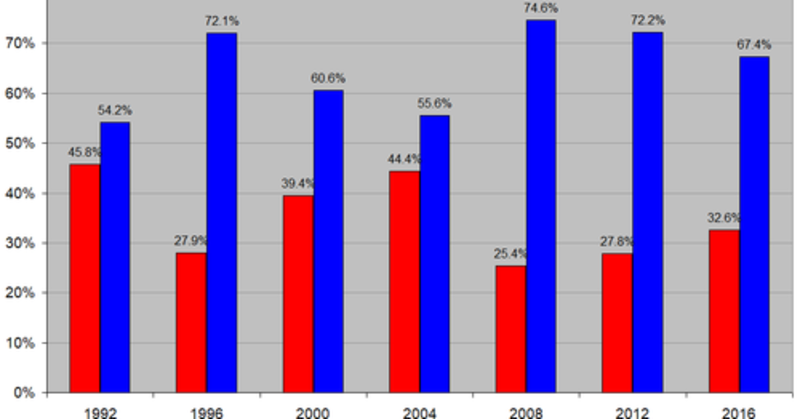 Bringing in ringers. Electing a new people. Choose whatever metaphor you’d like to describe the disenfranchisement of Heritage America.

We have to go back to 1988 to find an election where the Republican candidate won the foreign-born vote.

That was a different era.

Those foreigners are not today’s foreigners. The ink on the amnesty legislation Reagan eagerly signed was still drying and the massive chain migration it set in motion only just beginning.

The Cold War, when many of those the US took in were Soviet dissidents, was ongoing.

Hyper-partisanship hadn’t reached the point it has today. Now landslide victories are nearly impossible. In 1988, Bush senior beat Dukakis 426-111 in the electoral college. There has not been a margin of victory so wide since, and until the political dissolution of the US begins, there won’t be again.

So before Democrats parade down the streets and proudly, self-righteously display their sympathy, compassion, empathy, hearts, whatever you want to call it…let’s remember that their work benefits them.

And, at The Federalist Papers Project, we know the level of fraudulence in American elections that is oftentimes tied to said party.

Where there are more votes than voters.

Where even illegals receive the right to vote.

Are we losing the American vote?

Don’t hear me wrong. I understand the history of this country and we are comprised almost entirely of an immigrant population.

These people, however, who once came from England, Italy, Germany, China, fill in the blank, wantedto be Americans. Theywanted to be American citizens.

They believed in the principles of the American founding and the exceptional nature of the United States’s government.

Now, we have individuals illegally crossing our borders, entering our country to receive free services, education, and opportunities for employment without being a part of the political body, and without embracing the vision set forth in the Declaration of Independence and the Constitution.

Those who are, according to these statistics, then decide to vote for the party who tells them what they want to hear, promises unicorns stuffed with cash, and free everything. All on someone else’s dime, of course.

This is NOT a party who strides to maintain the integrity of this nation and what it was founded upon.

I do not care what race, what country, what sex you are. I do, however, believe we should vote to maintain the greatness of what our country was once founded upon.