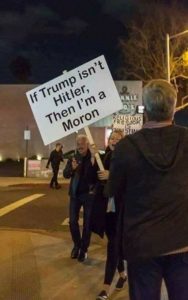 Calvin Freiburger reports for the past week, the Left has ramped up its violence, dishonesty, and hypocrisy to almost-unprecedented levels, and it has been aggravating to watch the moderate/elite/NeverTrump faction of the Right groveling before it.

So we thought this was the perfect time to highlight the following video, which says everything we’re thinking right now — and does it with fantastic wit and style.

For good measure, let’s also recall a small sampling of the Left’s true violent nature. Help us make this video go viral to entertain, inspire, and inform as many people as we can!

VIDEO: Antifa Attacks Conservative But Never Expected THIS To Happen!

More Than 1,000 Leftists Gathered In Chicago To Cheer A Convicted Murderer Who Hates Israel