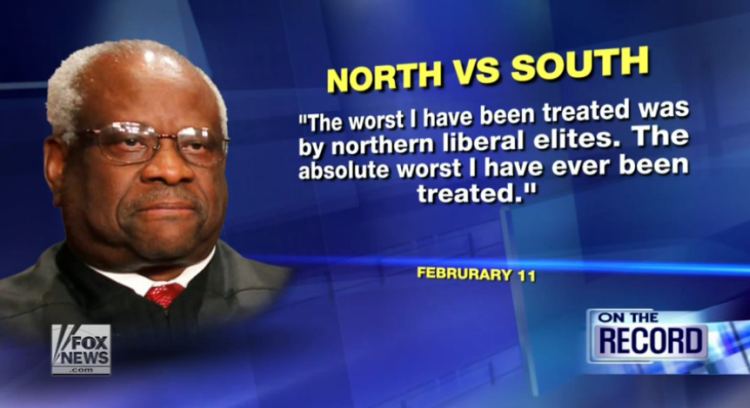 This will likely come as a surprise to no one who pays attention!

“My sadness is that we are probably today more race and difference-conscious than I was in the 1960s when I went to school. To my knowledge, I was the first black kid in Savannah, Georgia, to go to a white school. Rarely did the issue of race come up,” Thomas said during a chapel service hosted by the nondenominational Christian university. “Now, name a day it doesn’t come up. Differences in race, differences in sex, somebody doesn’t look at you right, somebody says something. Everybody is sensitive. If I had been as sensitive as that in the 1960s, I’d still be in Savannah. Every person in this room has endured a slight. Every person. Somebody has said something that has hurt their feelings or did something to them — left them out.

As one of six Catholics on the court, Thomas also addressed the role his faith plays in his work as a justice.

“I quite frankly don’t know how you do these hard jobs without some faith. I don’t know. Other people can come to you and explain it to you. I have no idea,” he said. “I don’t know how an oath becomes meaningful unless you have faith. Because at the end you say, ‘So help me God.’ And a promise to God is different from a promise to anyone else.”

Are you surprised that northern liberals are more racist towards Supreme Court Justice Clarence Thomas than southerners?