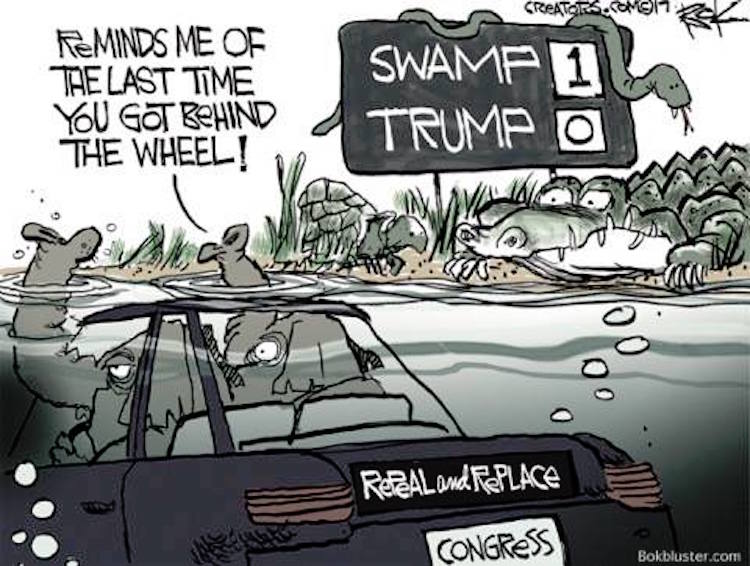 As TFPP has been regularly covering, ever since the 2016 election the Trump Administration has been hard at work dismantling Barack Obama’s regulatory legacy piece by piece, something we couldn’t be more thrilled about.

Unfortunately, in Congress it’s as if the election never happened.

After months of spending battles that culminated in a brief partial government closure in January, Senate Democrats and Republicans struck an agreement Wednesday to end the fighting. They agreed to raise federally mandated spending caps for both domestic and military budgets by $37 billion and $54 billion over two years, respectively.

The broad outlines of that spending cap agreement will be codified in Thursday’s short-term spending bill, although the money will not be fully appropriated until the omnibus is written next month.

More significantly, Democrats agreed to drop a demand that spending legislation include a provision to protect so-called Dreamers from deportation.

In exchange, Majority Leader Mitch McConnell, R-Ky., pledged to bring up immigration reform vote a vote next week, although it is not clear any proposal can win the 60 votes needed for passage.

President Donald Trump thinks the deal is just fine because it funds the military, and House Speaker Paul Ryan and Senate Majority Leader Mitch McConnell are trying to sell it as an imperfect-yet-reasonable compromise. Senate Democrat leader Chuck Schumer agrees, though House Democrat leader Nancy Pelosi has been throwing a tantrum about so-called Dreamers being left out.

More importantly, most of the conservative House Freedom Caucus opposes the deal, calling it a blank check to grow the national debt further still, and Senator Rand Paul (R-KY) is currently threatening to block a Senate vote on it unless a vote on an amendment to restore budget caps is held first.

That’s a good start, but the simple truth is this deal needs to be killed outright. As Conservative Review’s Daniel Horowitz details, defense spending is the only thing conservatives get out of this deal; everything else reads like Democrat Party shopping list:

– hundreds of billions of dollars in new domestic spending;

– the creation of a brand-new federal entitlement program in the form of government-guaranteed paid family leave;

– another round of pork spending in the name of “infrastructure.”

But perhaps the greatest giveaway of all is what McConnell’s doing on immigration as part of this agreement:

McConnell is planning to introduce debate in the Senate on immigration next week by putting forth a blank bill with nothing in it. He will then allow anyone to offer amendments, and, in his words, “whoever gets to 60 wins.”

You couldn’t make up an abdication of leadership this cartoonishly awful if you tried. As abysmal a leader as John Boehner was (and make no mistake, he was abysmal) why did we go to the trouble of replacing him if we accept McConnell and Ryan being every bit as ineffective? At least Boehner had the excuse of Barack Obama’s veto; now a conservative budget could actually get signed.

And then there’s the matter of our president. Don’t misunderstand — I will never regret voting for him over Hillary Clinton, he’s governed vastly more conservatively than NeverTrumpers predicted, and I still maintain that establishment picks like Marco Rubio or Jeb Bush would have been no better. But we need to be honest about the fact that turning our national debt around has never been a priority for Trump, and he’s simply failing a key leadership test by accepting the deal’s other capitulations to the Left.

Competent leaders wouldn’t need to compromise with the Democrat minority on anything right now. They’d be throwing Obama’s “I won” back in Democrats’ faces and steamrolling over them with the agenda that their constituents voted for in 2016. Here’s hoping there are enough conservatives in Congress to kill this deal — and that afterward, this is the last straw that needed to break for Congress’s current leaders to get the Boehner treatment.