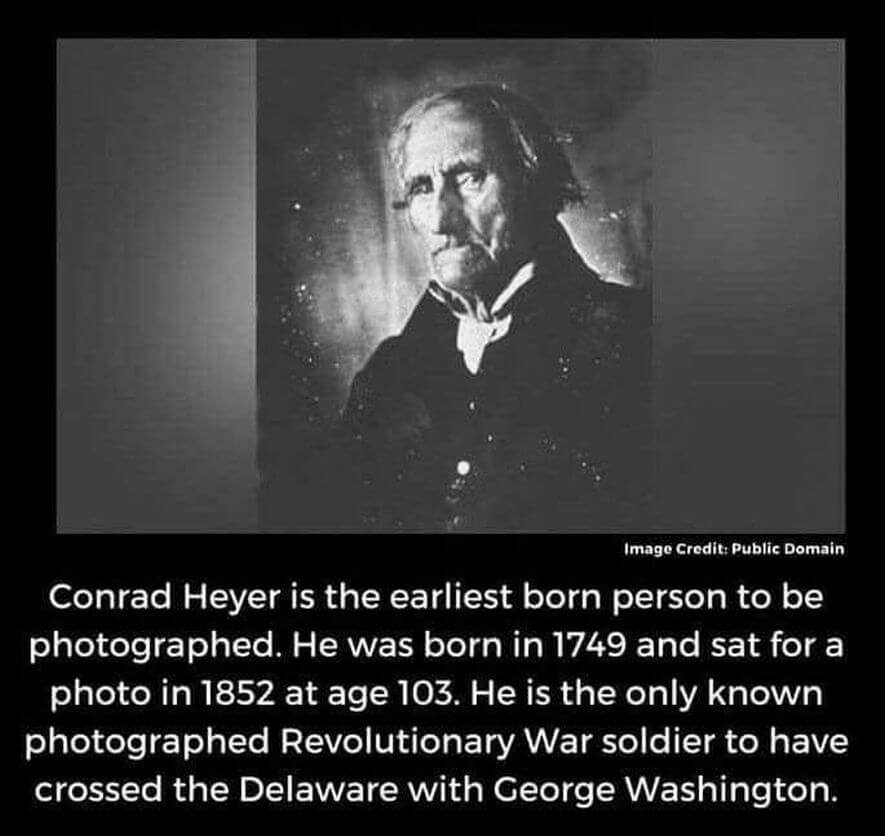 From the Journal of the American Revolution:

An internet search for Conrad Heyer will reveal that he was a Revolutionary War soldier who crossed the Delaware with George Washington.

In fact, you’ll find a variation of this sentence repeated on page after page almost word for word: “He served in the Continental Army under George Washington during the Revolutionary War, crossing the Delaware with him and fighting in other major battles.” Everyone, including some usually authoritative sources, apparently copied what someone else had already written without attempting to verify the information.

The reason that Heyer draws so much attention is that he is one of the hundred or so Revolutionary War veterans to have been photographed. By the 1840s, when photography was becoming widely available, veterans of the war were becoming scarce. Heyer, when his picture was taken in 1852, was among the oldest men ever photographed. The daguerreotype image eventually came into the possession of the Maine Historical Society where it remains today.

What about Conrad Heyer, who famously crossed the Delaware with Washington? Is anything amiss with his story?

To find out, I started in the same place that I did with the other six pensioners: their own pension depositions. The United States government passed legislation granting pensions to veterans of the Continental Army in 1818. Each applicant had to prove his military service using documents such as discharge papers, testimony of others with whom he had served, or a combination of the two. Most men applied in person at their local courthouse and gave a deposition that was witnessed by a judge or other official. Corroborating depositions by others were also sworn and recorded. Most of these records survive in the United States National Archives, and are readily available on microfilm at research facilities or through subscription internet services.

The purpose of the depositions was to prove service, not to tell war stories, so most of them are brief and focus on dates, titles of military units and names of officers. Because the first depositions were given thirty-five years after the war ended, and some long after that, discrepancies are common. But the very basic facts of how long a man served, and during what years, are usually not difficult to determine by comparing a deposition to other primary source information.

The pension deposition of Conrad Heyer, dictated to a justice of the peace who spelled his name “Hyer” on July 14, 1819, reads:

I Conrad Hyer of Waldoboro in the County of Lincoln & State of Massachusetts testify & declare that about the middle of December AD 1775 I enlisted to serve as a private in the army of the American Revolutionary War in the Massachusetts Line and Continental establishment to serve against the common enemy for the term of one year and that in pursuance of paid inlistment I did actually serve said term of one year in the army aforesaid and the line aforesaid & Continental establishment and against the common enemy; that the first of said year I was under Capt. Fuller in Colonel Bond’s Regiment, but that I was afterwards transferr’d to Captain Smith’s company in said Regiment and that after the death of said Colonel Bond the regiment was commanded by Colonel Alden who had the command of the same when I was discharged & that I was then in said Smith’s company. I received my discharge which was an honorable discharge from Captain Agry who gave me a pass in writing including three or four others, but nothing else in writing & said pass is now lost. The place of my discharge was on the North River at Fish Kilns and the time I received it about the middle of December AD 1777. That I never have received any pension under the United States. And I further testify & declare that by reason of my reduced circumstances in life I am in need of subsistence from my country for support & therefore respectfully ask to be placed on the pension list of the United States by virtue of the Act of Congress of March 18 AD 1818, entitled “an Act to provide for certain persons engaged in the land & naval service of the United States in the Revolutionary War.

Nothing about crossing the Delaware, but at a glance it seems plausible if Heyer served until December 1777. Looking more closely, though, there’s an inconsistency: Heyer says that he enlisted in December 1775 and served for just one year. This sort of discrepancy turns up frequently in pension depositions, and can be resolved by learning about the regiment in which Heyer served…