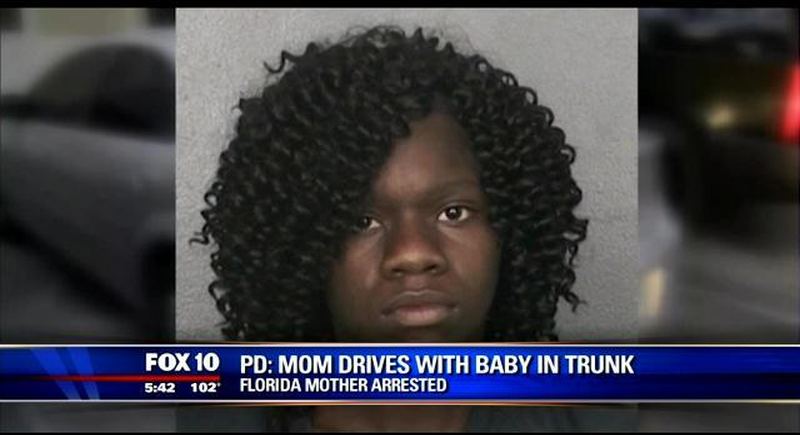 A teenage mother faces child abuse charges after police allege they found her 5-month-old baby in her trunk lying on a pair of hedge clippers, surrounded by other dangerous objects including a gas can.

Via the Associated Press:

Broward Sheriff’s deputies say they tried to pull over a vehicle on Tuesday but Breona Watkins kept driving. When she stopped, the deputy heard a baby crying in the trunk.

Deputies say Watkins told them she asked her 14-year-old passenger to slide the baby into the trunk through a back seat panel because she didn’t want to get ticketed for not having a car seat.

This completely irresponsible act illustrates just how far American morality and responsibility has fallen. 50 years ago people were poor and lacked education, but the overwhelming majority were morally responsible, had self-respect, and were still believers in the “pursuit of happiness.”

For so many, entitlements and benefits seem to have replaced individual responsibility, the moral fabric of America has been broken, demeaned, discouraged and ridiculed by those who desire a “fundamental transformation” from America’s founding principles to a “new” society of managed, controlled and “maintained” serfs.

It has resulted in an American disaster.

What do you think about people who would put their baby in a trunk to avoid a car seat violation? What does this say, if anything, about the moral fabric of America?