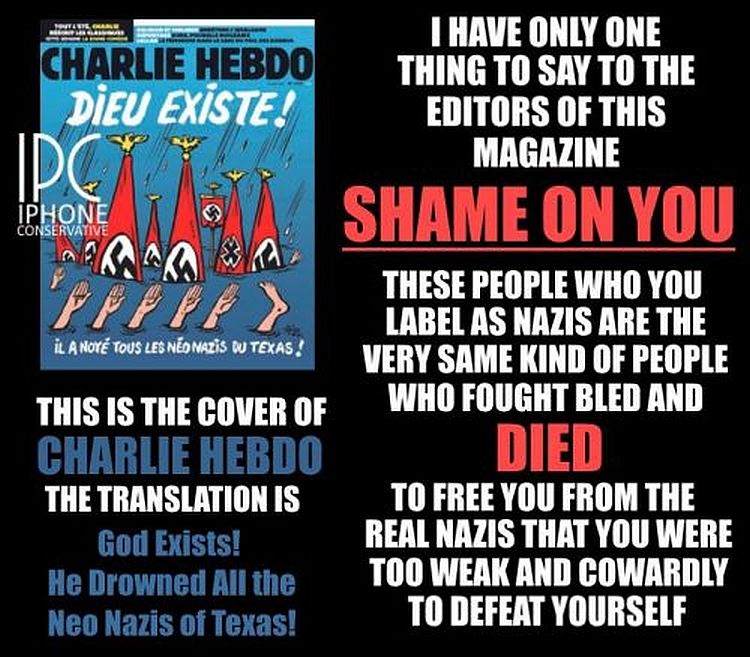 The Right Scoop highlights the following cover of a new issue:

Charlie Hebdo cover. If I'm reading this correctly, it says: "God exists! He drowned the neo-Nazis of Texas." pic.twitter.com/dzU1Dc3F73

*all the neo-Nazis of Texas. My French is pretty bad.

“It looks like every scummy atheist is using a terrible tragedy to mock religious people, because that shows the best of their values,” Right Scoop blogger Soopermexican commented.

This is so cruel, so dishonest, so thoughtless, so talentless that one scarcely knows where to begin.

The idea that scores of Texans (including 30 fatalities so far) deserved this suffering? The premise that Nazis comprise any meaningful percentage of the Texas populace? The contrast to how Texans reacted when tragedy struck Charlie Hebdo?

It’s all so self-evidently wretched and idiotic and pointless. There is nothing resembling a point here, not one scrap of artistic, satirical, journalistic, philosophical, or political merit. The sole purpose on display here is malice for malice’s sake.